When a pair of robins began construction in the cedar shrub outside our kitchen window, I figured the only decent thing to do was stay out of the kitchen for a couple of months and give them their space. My husband, however, decided closing the venetian blind between us and the nest would grant them all the privacy required. Bummer.
This process is providing a delightful education. Here are three lessons I have observed so far.

Number One: Do the thing that lies within you to do.
With fascination, I watched the robins create the nest, placing the twigs just so, then tamping them into place with their little feet. I couldn’t build a nest like that without a kit of supplies, written instructions, and a whole lot of super glue. Even then, it would be shaped all wrong and probably fall apart in the first wind.
Robins, however, can’t not build a nest. It’s what they are hard-wired to do.
I believe God has placed within each of us at least one thing we can’t not do. Be it music, teaching, building, growing flowers—you name it—we know deep down we are hard-wired to do that thing. The difference between robins and humans is, we have a choice. We can abandon our one thing, and in the face of opposition, we often do.
But it’s never too late to start again. The world needs your one thing, even when you’re tired or discouraged and would rather let it lie. A half-built nest is worthless. 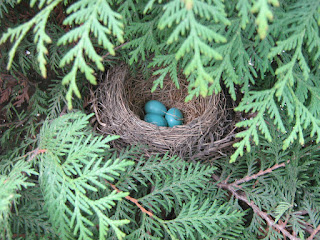 Number Two: Defend what you’ve been given to defend.
Over the course of three days, Momma Robin laid three beautiful blue eggs and began the tenacious process of incubation. I knew there would be no more opening the window to snap photos unless I wanted a close-up of a bird attack. Just coming near the window earned me an instant open beak of warning. I wondered if she feels inclined to fly away instead, never to return.
What have you been called to protect and fight for? Family? The poor? The abused? Your own gifts and talents? Guaranteed, your thing to protect will be threatened and attacked. The enemy of your soul wants your one thing destroyed, not blessing the world like it was intended. You’ll be tempted to let him win, to step aside and surrender because it’s easier. Please don’t stop fighting when fighting is right.

Number Three: Hang on tight through the storms
When the May 14 windstorm hit Portage la Prairie, we watched from the safety of our house while the cedar bush by the kitchen window swayed and swirled. What would Momma Robin do? Could she hang on? Would she find a safer place? Would the nest come apart, dropping the eggs to the ground?
Though I can’t imagine how fast her tiny heart must have been beating, she held firm. This chick knows her priorities.
I want to hang tough through the storms of life, too. And they do come, to all of us. Some bring more damage than others, but their threats seldom equal our fears. Morning eventually comes, bringing calm and sunshine and hope.
That’s a lot of education from such a small creature—and all before the eggs hatched. Somehow I suspect there is more to come.
Posted by Terrie Todd at 6:54 PM

Releasing November 16, 2021. Some Puzzles Refuse to Be Solved

Ray Matthews’ dream is to be an artist. But his father’s death during the Great Depression forces him to drop out of art school and support his mother and sister by selling his paintings to a jigsaw puzzle maker. However, there’s one personal masterpiece Ray vows never to sell: a portrait of his sweetheart, Sarah. When compelled to break his oath, Ray speaks a prophecy over the puzzle— that no one will be able to finish it before he and the love of his life are reunited. During the next 80 years, the puzzle passes through four different households. Though all are profoundly affected by Ray’s girl at the wishing well, none are aware of the connection between them—until one decision unleashes a peculiar chain of events. When all five journeys converge in visible and invisible ways, each individual life is strengthened and forever shaped by the lessons offered through one extraordinary puzzle.

Terrie Todd
I'm a wife, a mom, a grandmother, a writer, and most of all, a disciple of Jesus Christ. Represented by Mary DeMuth of Books & Such Literary Agency, I'm also the recipient of the 2018 ICWF Janette Oke Award.