Keeping the "imp" in "Mission Impossible"


This spring break, I decided to take a week’s vacation so Grandpa and I could host sleepovers for our grandsons – three in a row, one rascal at a time. Knowing the solo stays would be easier to manage, I told myself they would provide a chance to get to know the boys as individuals. I stocked up on children’s books and videos from the library and shopped for easy-to-prepare food and treats.

I knew better than to clean the house.

Alfalfa, six, was first in line. We took him to our local theatre for the matinee presentation of Mr. Peabody and Sherman. Back home, we played Scrabble Junior. Alfalfa showed off his reading skills by reading a couple of books aloud. After supper, we played hide and seek and discovered Grandpa finds the best hiding spots while Grandma tends to rely on camouflage. 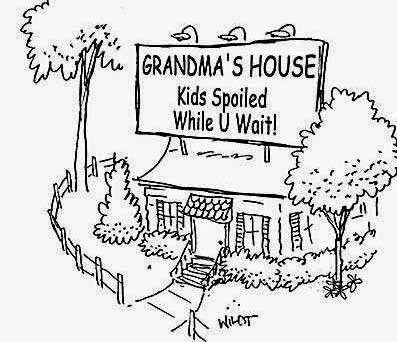 A few rounds of Uno, some ice cream and berries, and a Snoopy video got us to bedtime. The next morning we found time for a couple games before church, a fast food lunch after, and a few computer games before home time. I felt pretty smug about how Project Sleepover was going.

While Grandma napped in preparation for round two, Grandpa took Alfalfa home and picked up Buckwheat, age four. With him, we played Candyland and Memory and made the coolest fort EVER where we ate popcorn and watched Duck Dodgers. Buckwheat slept in the fort.

Due to circumstances beyond my control, his sleepover stretched into two nights. I watched while Grandpa and his boy spent a good hour in the PCU Centre pool. That evening, my energy giving out and round three still ahead, I started questioning my sanity.

By the time we arrived home with Spanky, age two, it was supper time of the fourth day. Did I mention Spanky is also known as Hurricane Spanky? If it moves, he chases it. If it doesn’t, he moves it. If it’s tall, he climbs it, and if it has a button, he pushes it. His mom advised that taking him outside or putting him in the bath tub would make him go to sleep faster. We did both, to be sure.

Next morning, books and games didn’t make Spanky’s agenda, just a lot of chasing around. Grandma was rapidly wilting. I took him outside awhile, only to discover he could easily walk on top of the high snow drifts and escape while I plunged in hip deep. I swear this kid’s guardian angel deserves some kind of medal.

Back inside, I peeled off his coat, mitts, and boots first. In the time it took to remove my own, Spanky had made his way to Grandpa’s home office, photocopied the entire phone book, and Skyped with somebody in Venezuela.

After lunch, Grandpa took over while I fell exhausted onto the couch, feeling less and less successful as the involved grandparent I fancied myself. I was still there when Grandpa returned after taking Spanky home, a miserable lump of a failure sitting in the middle of the chaos.

“Guess what?” Grandpa reported.  “The boys’ daddy hinted that maybe this could become an annual tradition. Alfalfa and Buckwheat haven’t stopped talking about their sleepovers.”

I know the day is coming, faster than we’d like, when the rascals will lose interest in sleepovers at our house. Until then, I truly do hope we can make it a tradition.

Just let me take a long nap before I commit.
Posted by Terrie Todd at 1:54 PM