In June, I attended a wind-up party where fellow Prairie Players members were discussing the old movie Casablanca. When I admitted I’d never seen it, my friend Terry promised to bring me a copy on VHS tape. When he delivered it, six others were in the bag: The Maltese Falcon, The Third Man, Kind Hearts and Coronets, We’re No Angels, My Girl Friday, and The Lady Killers. I guess Terry figured I have no life, and he must be right because I can now say I’ve watched all of these classics from the 1940’s and 50’s. And now I’m subjecting you to my opinion. 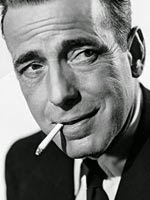 First of all, for the life of me I can’t find the appeal of Humphrey Bogart. The only attractive thing about the man was the double-breasted suit like my dad’s 1948 wedding suit. That weird thing he does with his mouth, the nasal voice, the ever-present cigarette, and the incessant sexist and racist lines might be given to the villain in one of today’s movies, but never to the leading man. Yuck.

As for the movies themselves, either the plots are awfully slow and simple or I am. Endless dialogue expresses every thought the characters ever had, in case the viewer is too dumb to figure out what’s going on. And in case you missed a thought, you can read their minds by the over-acted facial expressions interrupted only by occasional interludes of cheesy music. Clearly, the actors were more familiar with stage performance where the audience members might be 50 feet away as opposed to a camera lens smack in the face.

Fast-forward 70 years. Hubby and I recently saw two brand new movies: Lucy, and Guardians of the Galaxy. In today’s movies, real dialogue has been replaced with fast-paced one-liners you’d need to watch several times over in order to catch them all. Violence abounds. Slashing, bashing, smashing destruction is the order of the day. Explosions, high-speed chases, and high crime are requirements. Plot lines are completely out of this world. Computer animation makes it impossible to tell what’s real. (Did they paint that actor green or just colour him in later?)

I prefer to leave both the oldest and the newest movies for someone else. Give me a good romantic comedy for laughs or a based-on-a-true-story drama for inspiration.

Here’s an exercise for you. Without thinking too hard, list your five all-time favourite movies. After you’ve listed them, look for a common thread tying then together. When you can identify a theme, chances are it’s a clue to your passion in life.

My top five all carried the theme of people overcoming some kind of mental or physical challenge, most based on true stories: Rain Man, A Beautiful Mind, I am Sam, Door to Door, and What’s Eating Gilbert Grape? What that says about me, I’m still trying to figure out. I certainly can’t pretend to understand what it’s like to live with autism, schizophrenia, developmental challenges, cerebral palsy, morbid obesity, or depression as depicted in these stories.

Speaking of movies and depression, everyone seems to feel the need to express an opinion about the death of Robin Williams. Other than feeling bummed because we’ve lost a brilliant humourist, there’s not much I can say. Never met the man. Pretending I understand mental illness would be stupid and wrong. Speculating on his eternal destination would be even more stupid and wrong.

Wikipedia credits Williams with 81 movies, and a quick glance at the list tells me I’ve seen about half of them. I enjoyed most of those, especially Patch Adams. The real Patch Adams practiced medicine around his philosophy of treating patients using humor and compassion. Hmm. My blog banner features the following words from scripture: “A merry heart doeth good like a medicine...” (Proverbs 17:22) Perhaps therein lies the key to how the theme of my favourite movies lines up with what I’m passionate about.

What are your favourite flicks?
Posted by Terrie Todd at 5:16 PM