By popular demand (okay, it was just one person, but she's very popular), here is a rerun of a purely fictional story I ran in 2010, written while imagining what could happen following a civic election before I understood why it never could. Can you spot anything particularly atypical about it?

Adored by many, His Worship Mayor Zigfried Johnson stepped to the podium to address the citizens of Quincy one final time.

“Before my 20-year career as your mayor draws to a close,” he said, “I have something I must tell you. Confession is never easy, but it is good for the soul. Disclosures of this nature are uncommon from a man in my position, and I sincerely hope this will not result in your becoming cynical toward my successor. Even I voted for him, and I am confident he would never stoop to the type of behaviour which I am about to divulge.”

Five hundred voters held their breath, awaiting the mayor’s next words. George Xander, although voted in by an overwhelming majority this time, would never be as loved or trusted as Mayor Johnson had been. He had, after all, run against Johnson in every election held since they were college boys together and had lost every one. If not for Zigfried’s voluntary retirement, a new mayor would not even have been considered by the good people of Quincy. Just what was their beloved leader about to share?

Kay Johnson, his wife of 43 years, stood by his side looking adoringly up at her Ziggy, assuring her fellow citizens that his revelation would not be of a licentious nature.

“Let me begin by taking you back to that Election Day 20 years ago,” the mayor continued. “Maybe you remember that I won by only one vote that first time. Never one to settle for such a close count, my worthy opponent here, Mr. Xander, demanded a recount. Of course, the election officials complied. 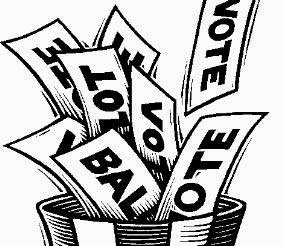 “Perhaps it was fate, perhaps it was something else,” the Mayor continued. “Quincy residents may remember the near tornado conditions that prevailed that day, but what you probably don’t know is that as the votes were being recounted, an assistant opened a window, causing ballots to go flying around the Council Chambers. Results were delayed, but after all the ballots were gathered up and counted yet again, it was confirmed that I had indeed won by one vote.

“Six months later, while moving the heavy oak table in the Council Chambers, what did I discover but four uncounted ballots wedged inside a drawer in the table. Three of them were votes for my opponent, George Xander. Unless there were still more uncounted ballots hidden somewhere, George, not I, had actually won the election by one vote. Vigilantly, I searched the room for more lost ballots to no avail, then discreetly shredded the four I’d found and remained your mayor for the next 20 years.”

With tears in his eyes, the Mayor removed the chain of office from around his own neck and placed it around his successor’s. Xander humbly received the adornment and stepped up to the microphone.

“You are forgiven, my friend,” His Worship Mayor George Xander said, silently recalling the windy day he’d stood outside that Council Chamber window enjoying a cigarette, when two ballots had come floating his way—both votes for Johnson, and both quickly stuffed deeply into his own pocket.

Ziggy Johnson smiled and sighed, a 20-year weight off his weary shoulders at last.

Did you notice? This is an “acrostic” story, where each sentence begins with a different letter, in alphabetical order from A-Z. Hope you enjoyed reading it as much as I enjoyed writing it.