For anyone who ever loved a cowboy...


Yee Haw! In honour of the rodeo coming to town this weekend, I decided it was a good time to share my annual acrostic fiction story. Each year, I enter the Brucedale Press acrostic contest and this year I was pleased to take second place with my cowboy tale.The same first three words were assigned to everyone. After that, writers can write about whatever they wish, as long as it totals 26 sentences and each sentence starts with the next letter of the alphabet, in order. I hope you enjoy reading my story as much as I enjoyed writing it!

Appreciating the finest of Billy Bob’s culinary art, Stacey Quentin wolfed down the slightly burnt beans and chased them mercilessly with strong coffee. Billy Bob might not be the greatest cook on the prairie, but he was the best Virgil McCoy’s Cattle Company offered; besides, Stacey knew the tastiest sauce was hunger. Cooking was something she had never aspired to, no matter how much the cowboys—especially Grady Drummins—taunted her about it.

Driving cattle and studying the teachings of Socrates, an unusual combination to be sure, were the 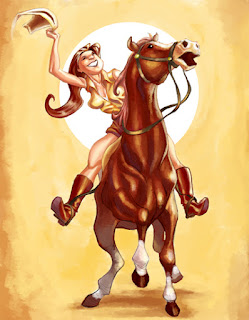 two things Stacey loved more than anything. Even though she was a girl, she pulled her weight on horseback while holding her own in discussions around the campfire about the classical Greek philosopher—a subject for which Grady Drummins showed a surprising affinity. For eight weeks, she’d kept up with the men on the long drive from Texas to Kansas and only once had she required assistance from one of the cowboys. Grady hardly thought of her as a girl anyway. He had roped the calf Stacey’s lasso missed and carried it in his arms, laughing as though it was light as a feather.

“I think you need a little more practise, Plato,” he said as he deposited the calf at Stacey’s feet and walked away with a grin.

Just you wait, she thought. Kansas City would be upon them soon and with it, payday. Laugh if you like, Grady Drummins, but I earn a man’s wage and deserve every penny of it.

“Marry me, Plato,” Grady called out in jest every time Stacey got within earshot. “No man needs a womanly woman when he can have one who knows how to wrangle cattle and quote Socrates.”

“Once made equal to man, woman becomes his superior,” Stacey quoted through clenched teeth, determined to show Grady Drummins his place one day soon.

Payday arrived at last, and Stacey was able to bathe and slip into a pretty frock before lining up with the other drivers to collect her earnings in Kansas City.

“Quentin, Stacey,” called out the payroll master with a bored drawl. Roy Fisher thought he’d seen everything, but when a young lady stepped forward to collect a driver’s wages, he laughed in her face. “Stacey Quentin,” he called again, looking around the room to see which of the cowboys might have been gifted with such an unfortunate name.

“That’s me,” Stacey insisted as she reached for the roll of cash.

“Unless one of these fellas is willin’ to sign for it, I can’t let you have this here money, Miss,” the payroll master said, holding the roll high above Stacey’s head. “Virgil McCoy has his rules and they don’t include payin’ cowboy’s wages to a mere cook.”

“Wait just a doggone minute,” a deep voice boomed from the back of the line. “Xanthippe herself couldn’t have proven more worthy than Miss Quentin here, one of the finest cattle drivers I’ve ever had the privilege of working with. You can hand over what she’s got coming to her right now or I’ll hand over what you’ve got coming.”

Zany as it seemed, Grady Drummins had stood up for Stacey and referenced Socrates’ wife in one fell swoop, convincing her she’d be a fool not to welcome his next proposal of marriage, whenever it might come.