It takes a village to stage a madcap mystery.

You’re in for some sheer lunacy and a roller-coaster ride of antics if you attend the Prairie Players’ upcoming production of Done to Death, written by Fred Carmichael. (At one point, Carmichael writes himself into the play, but few of the characters have heard of him.) Directed by Paul Oleynick, Done to Death features a cast of 17 plus one pre-taped celebrity in the mix (Broadcasting Hall of Famer Boyd Kozak. You probably listened to him on CKRC back in the day, or more recently on CFQX. I hope I haven’t spoiled the surprise.)

Along with some veteran actors, you’ll see several fresh, young faces on the stage for this show. Bravo to the Prairie Players for mentoring the youth of our community in this way.

The plot of the play focuses on five has-been mystery writers who are brought to the secretive Vulture’s Vault to collaborate on a new murder mystery TV series. Then real murders start to happen (naturally), and hilarity ensues. The play is a huge parody of the murder mystery genre as each writer uses their own style in hopes of solving the murders. It often delves into fantasy sequences and “breaking the fourth wall,” so prepare to engage!

This clever piece should be a real hoot for fans of whodunits, since it’s a parody of every stereotypical (and not so typical) murder mystery plot, hero, and villain used in the last century. Done to Death has been performed by community, school, and professional theatre groups since its first production in 1970. 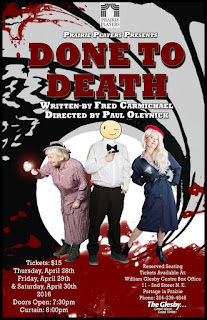 I sat in on a rehearsal specifically so I could tell you about it and concluded that this might be the wackiest production we’ve seen from the Prairie Players yet. And I mean that in the nicest way. Just when you think you’ve figured things out, the story takes another silly turn. Which means Jessica Olive’s quotable line may be the most appropriate of the whole play: “Hang on, darling audience. It can't get much worse.”

My predictions for the lines you’ll like best? Here are my top five:
“I’ve never fooled myself.”
“I’d just as soon kiss a dry sponge.”
“No one can predict reality.”
“Always say ‘him or her.’ Never narrow the field until you are certain.”

And, my personal favourite: “You can’t kill the author! That’s shooting the hand that types you.”