Jobs that Taught Me about Life: The Finale


It’s Labour Day and time to be wrapping up my series on jobs. I could write about my ten years at Portage Alliance Church that followed the college job, where I went from being the senior pastor's administrative assistant to a communications coordinator, to the director of creative arts. How I led the drama team and put together newsletters and PowerPoint shows and Sunday programs and schedules for the music and tech teams. How I wrote drama scripts and articles and produced Christmas banquets. How I got burned out.

Or I could write about how I traded all that for a part-time job at City Hall where I could simply do my job and go home. No evening meetings or Sunday mornings or putting in extra time. No people to lead. Knowing everything I did would be double-checked by a superior, so I could relax. How I studied through the required courses to obtain a Certificate in Manitoba Municipal Administration and got to attend a graduation ceremony for the first time since high school. How I would learn to conduct municipal elections and prepare agendas and minutes for city council meetings and so much more. How I would get to write speeches for the mayor sometimes. How hard it is to believe I’ve already been there over seven years.

Or I could tell about how the city hall job freed up time to pursue writing. How by the second year I would see two of the plays and several of the short sketches we’d done at church published, as well as some Chicken Soup for the Soul stories. How I’d ask for and get a weekly newspaper column. How I’d keep working on my novel, take writing courses, attend conferences, and make it to the finals in a contest that would attract the attention of an agent who would eventually sell my book and I’d see it published in 2016. How I’d sign a contract on my second novel just five months later.

Each of those paragraphs could easily be a story for another day. Each could tell of the lessons God taught me, the way he has been there leading and guiding even when I couldn’t feel his presence or see his hand. Even when health issues brought me to my knees in tears and defeat and I couldn’t understand how or why he heals some and not others. Even when I failed miserably to hear his voice.

Last week I was privileged to attend the American Christian Fiction Writers conference in Nashville where I learned from Allen Arnold about how we can choose to exist in one of two realms: the Orphan realm or the Freedom realm. When we exist in the orphan realm, we believe life is up to us. If anything good is going to happen, it’s because we work and strive to make it happen. It’s a place of fear, of hoarding, of control, of never having enough because we don’t know we have a loving Father who wants to invite us into something better.

The Freedom Realm is a land of “with.” In it, our Father invites us to do the things we love with him. It’s a place of fierce dependence on God, of peace and joy, of knowing that control is an illusion. It’s a place where “pro and con” lists are a toxic way to make decisions because they depend on my knowledge of the future. It’s a place of knowing I am a beloved daughter of God and I can enter into a new adventure with him every morning, every moment, and not need to have all the answers.

It’s where I want to live. 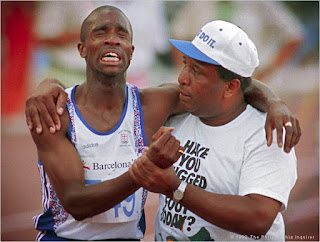 We closed the session with a look at a popular video, Derek Redmond’s famous run in the 1992 Olympics where a torn hamstring stopped him on the track but where he got back up and hobbled to the finish line. You’ve probably seen it. It’s a powerfully moving clip all by itself. The world has held it up as a story of courage and never giving up.

But it’s so much more. As I watched it again, I saw myself as that runner. The injury became my most recent wound, the loss of my newspaper column which was still stinging my heart. My Father comes down out of the stands to be with me. He fiercely defends me against those who would remove me from the race. And he supports me to the finish line.

Naturally, I was a complete and blubbering wreck. But it got worse.

The next morning during our worship time as we sang “Good, good Father,” God asked me something. “What if it’s about more than the lost column? What if that torn muscle represents your deepest wound, the thing that trips you up and speaks lies to your heart no matter how earnestly and frequently you’ve forgiven the perpetrator?” As I attached those hurts to the Olympics scenario, the fierce protection of my heavenly father’s love became more powerful still.

And I knew that’s where I wanted to live. Every moment.

Watch the video again. You’re the runner, hurling yourself down that track with all you’ve got to give. You’re in the lead, you’re set to win. Then life throws pain at you. You know what it is. That thing that happened when you were little. That thing that happened last week. Either way, you had no control over it. It hurt. And it still hurts. You believe it’s taken you out of the running. You get up and try to hobble along on your own.

But your Father comes. He defends. He supports. He comforts. He loves. He finishes the race with you. You are not alone. You do not have to live in the orphan realm.

Derek Redmond says, in spite of the millions of people who have been encouraged by his story, he would still prefer to have won the gold medal in Barcelona that day. But God knows that the areas where we are scarred and wounded are a gateway to our greatest strength.

Let him lead you there.

(To order Allen Arnold's book, The Story of WITH, click HERE.)
Posted by Terrie Todd at 8:24 AM

Email ThisBlogThis!Share to TwitterShare to FacebookShare to Pinterest
Labels: ACFW, Allen Arnold, Derek Redmond, Jobs that teach, Terrie Todd, the freedom realm, the orphan realm, The Story of With, Writing