I’m quite capable of making stuff up, but I have a tale to tell that I wouldn’t and couldn’t have invented. But it’s true, and it gives me goosebumps. And it shows me that God cares for my heart. And that he also has a sharp sense of humor.

Before I delve into it, you need to know that for at least a decade now, my church (Prairie Alliance) has used as its motto, “UPSIDEDOWN.” If you check its website, you’ll see that the phrase is based on a story from Acts 17, where the followers of Jesus were accused of “turning the world upside down.” In the first century, the church was a disruptive force in society. Paul and his companions, (including Luke, who recorded the events) ushered in a new normal: the presence of the Kingdom of God on earth. In it, positions of power were flipped, extravagant generosity met the needs of the neglected, gender roles were being rewritten. That’s exactly what Christians today are called to, and it is the desire of my church to be that same force in our community: turning it UPSIDEDOWN with the good news of Jesus Christ.

This “upside down” accusation happened while Paul and his colleagues were in Macedonia, which was then a province in Greece. (You need to remember that bit: Macedonia.) For reasons the Bible doesn’t clearly explain, Paul’s attempts to enter various other places were thwarted. Then, Luke writes, “That night Paul had a dream: A Macedonian stood on the far shore and called across the sea, ‘Come over to Macedonia and help us!’ The dream gave Paul his map. We went to work at once getting things ready to cross over to Macedonia. All the pieces had come together. We knew now for sure that God had called us to preach the good news to the Europeans.” (from Acts 16)

The story has become known as Paul’s “Macedonian Call,” and is referred to in an old hymn I grew up with called Send the Light.

That’s the back story. Now for mine.

For a long time, I’ve asked God how the things I’m doing with my life could possibly fit into my church’s UPSIDEDOWN dream. I see others doing “real” ministry, like going on mission trips, teaching, working with kids, serving the poor. Really making a difference. Sending the light. Meanwhile, I mostly stay home, hammering away on my laptop. Although I strive to write books and columns that will draw readers closer to their Creator, my stories seem disconnected from my church’s mission. I feel isolated, the words at times superficial. “Lord, I’d love it if you could grant me some small picture of what my part of this puzzle looks like,” I prayed. “How and where do I fit?”

Then I received an email from my publisher informing me that my first novel is going to be translated into a foreign language. I’d always wondered if this might happen one day. Which language would it be? What would they title it? What might the cover look like? Would it be French or Spanish? Possibly Dutch or German? 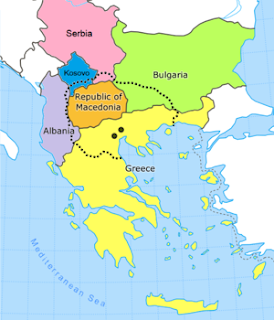 No. It’s none of those. It’s being translated into a language I didn’t even know existed, in a country I didn’t know still existed.

It’s called the Republic of Macedonia. Macedonians will be reading a story in their own language (Macedonian), set in Manitoba, dreamed up by a somewhat bewildered woman in little ol’ Portage la Prairie, who identifies with a motley group of Jesus-followers longing to turn the world upside down like Paul did. In Macedonia.

And I kind of lost it. Because you can’t make this stuff up.
Posted by Terrie Todd at 6:15 AM