You probably already know how addictions are formed; how the human brain responds to hits of dopamine, the “feel-good” hormone. You already know that alcoholics serious about kicking their addiction must remove all traces of alcohol from their environment. You grasp the concept of how clearing your home of junk food helps you shed bad eating habits. And so on.

But understanding how and why this happens is a fascinating science and can be encouraging because it means you can train or retrain your brain to respond the way you want it to.

In his book, Atomic Habits, James Clear explains the four-step process of Cue, Craving, Response, and Reward. For example, you see a plate of cookies. That’s the Cue. The second step, Craving, is the way you interpret the cue—as in, “I should eat one.” The third step, Response, is the action (you eat one). And lastly, the Reward. It tastes good.

All of that is easy enough to grasp.

What I found intriguing is what studies of the human brain reveal. Once we become addicted, the dopamine spike in our brain does not happen at the point of Reward, or even the point of Action. It spikes at the second step, the Cue. In other words, it’s the anticipation of the reward, not the reward itself, that triggers the rush. A gambler’s dopamine spikes when he sees the dice, not when he throws it.

What does this tell us? Perceived value motivates you to act. Which means perception, at any point along this path, can change the whole outcome. So, whether you’re trying to develop a good habit or break a bad one, four laws of behavior change accompany these four stages: make the habit obvious, attractive, easy, and immediately satisfying.

On the flip side, if you’re trying to break a bad habit, the four laws are the opposite: make it invisible, unattractive, difficult, and unsatisfying. This all takes a little creativity, but the book provides tricks. The best news is that often by addressing only one or two of these steps, you can successfully change your habit.

Here’s one way I stumbled into this. For years, I used to read my Bible and a short devotional while I ate breakfast. Both were good habits—physical and spiritual nutrition all at once. Then I switched my breakfast from granola to smoothies. Drinking a smoothie did not require sitting, so I took it to my bedroom and sipped on it while I dressed, put on my makeup, and did my hair. I was having a more nutritious, lower calorie breakfast and saving time.

The only problem was, after a while I realized I was no longer reading my Bible. I had “unbundled” my habits and lost something precious in the process!

Last December, I accepted a challenge to read through the book of Luke, a chapter a day. I bought a pretty journal and sat beside the Christmas tree before dawn with my favorite coffee. I lit a candle and turned on my fake fireplace. Soon I was loving the experience so much, I didn’t want the month to end. The highly welcoming atmosphere had tied itself to the habit I was trying to form.

With the tree put away, I was able to keep the habit going at my desk—by keeping my Bible and a new journal handy on my desktop and using a favorite new fountain pen I received from my son for Christmas. Of course, I kept the candle and coffee. It seems silly, but it worked. It’s several little things, but they made the experience obvious, attractive, easy, and immediately satisfying. 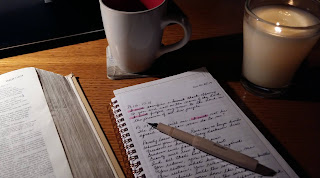 Which is the whole point. Little things. Every day. Over time. Equals results.
Posted by Terrie Todd at 7:35 AM