Another Waltz Around the Sun 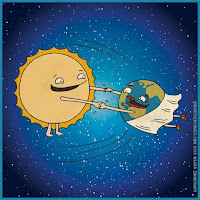 I’ll celebrate another birthday in a few days. Hard to believe last year at this time I was in sunny Florida enjoying a writers’ retreat—a sixtieth birthday present to myself. Somehow I never gave much thought to beyond sixty, but here I am.

Hubby’s birthday falls four days later, so for those few days each year we are the same age…and showing it. Recently, I cut a grapefruit in half for us to share as “dessert” at lunch. Since he needed to leave, he asked me to save his for later. Knowing he likes his cold, I put it in the fridge. Then I decided to save mine, too. But since I prefer grapefruit at room temperature, I left mine on the counter.

When I went to eat it later, it was missing.

“Oh,” Hubby said. “I thought it was mine and you forgot to put it in the fridge, so I ate it anyway.”

Seems our world is getting awfully small.

What age would you like to return to if you could? Or what age would you choose to stay, given the option? It’s interesting to see how often people—given enough time to really think this question through—end up choosing the age they are right now. Oh, some might want to go back and change some of the choices they regret. Others might like to relive their carefree childhood or the year they first fell in love or a time of life where they felt strong and energetic. Some would wish to return to when their now-grown children were little, perhaps just for a day.

I suppose if it were only for a day, I’d like to pick nearly any age to relive—provided it was a good day. But to stay there? No thanks. I have no desire to relive the challenges of high school or various jobs or parenting. As nice as it might be to find myself in a more youthful body, I wouldn’t want to lose the wisdom I’ve gained along the journey—even that which came through pain and regret. Would you?

We live in a culture that does not value the wisdom of our elders. Where differences of opinion occur, it’s often easier to trust the voices of those who are quicker, louder, more tech savvy and confident. Those who are up on the latest trends and most recent developments, who more easily recall the latest newsfeed or tweet.

I recently read an interesting article about a 2016 study conducted at Swarthmore College in Pennsylvania (led by Professor of Psychology Frank Durgin) that tested the ability of people to estimate the angle of a hill based on their age. The results surprised him. Using a well-walked hill on the college’s campus, the study found that older adults were better at interpreting the correct slope of a hill than young adults. The prof believes this is because of greater life experience. While all participants saw the hill as steeper than it actually was, the older folks’ estimates were closer to accurate.

You could say that with experience comes sharper perception. Perhaps the hills we’ve already climbed—literally and figuratively—help us to see that the ones which lie ahead are not as insurmountable as they might appear. I like to think so. One thing I know, and that’s the older I grow, the more I know I don’t know. Could that be the secret of wisdom? Not everything is as it appears.