Not on My Watch

Do you have moments you wish you could return to and prevent something from happening? I suspect we all do. I experienced one last week.

You may recall my telling about the eight days I spent in charge of my small grandsons in Calgary last January. With their parents two countries away, I felt paranoid all week that something horrible would happen to one of the boys on my watch. I mentally rehearsed how I’d handle such a disaster.

Ironically, when we visited them again last week, such fears were farthest from my mind. With their mom in a Zoom meeting at home and their dad running an errand, I decided to take the boys to the park at the end of their street. They rode their bikes and wore their helmets. They enjoyed a swell time on the swings, slides, and climbing equipment. I loved pushing them, catching them, and laughing with them while we soaked up a glorious sunny morning.

When it was time to return home, I began packing our belongings and helping the younger guy put his bike helmet back on. Linus, the four-year-old, had never taken his off. He jumped on his bike and took off. Next thing I knew, a stranger ran toward me carrying a screaming Linus. His mouth appeared to be full of blood, the front of his T-shirt soaked red. A closer look revealed a deep gash in his chin. He was shaking and hysterical. 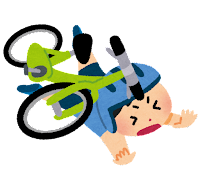 I’d make a pathetic paramedic. At first, I thought I’d lost my phone. After finding it in my back pocket, I called my daughter with shaking fingers and voice. Long story short, Linus ended up with four stitches in his chin and his parents did not get their “date night” that evening.

Funny how we think. No one blamed me. In fact, my daughter said if it had to happen, it was the best-case scenario because I could stay with the two-year-old, freeing both parents to take Linus to the hospital.

Did it have to happen? I suppose as long as we live in a broken world where gravity rules and is (mostly) a good thing, these things do “have to happen.” But I’d gladly split my own chin open and worse if doing so could have spared Linus the pain and trauma. Every parent and grandparent understands that.

I’m relieved to hear Linus is healing swiftly. Hopefully, he’ll be a little more cautious…or maybe not. He is a four-year-old boy, after all.

For me, I suppose it’s yet another lesson in humility and knowing I cannot control everything. Sometimes my best effort isn’t enough. If their parents trust me with the boys again, I hope I’ll be more mindful without becoming a worry-wort, helicopter grandmother. Besides, I’ll never know how many angels surrounded Linus that day, allowing this relatively minor injury while preventing one far more serious.

A teacher I admire once said, “Don’t ask God to keep your children safe. Instead, ask him to make them dangerous. Dangerous to the kingdom of darkness.” That’s a hard one to swallow, but there’s truth in it. I suppose if we allow the hard knocks of life to grow us and our children into more valiant warriors in the Lord’s army, they can be answers to that prayer.

Even if they must happen on my watch.
Posted by Terrie Todd at 5:11 PM