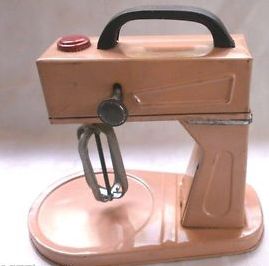 I must have been around five the Christmas my parents gave me a little pink mechanical mixer. I loved that thing. It came with a yellow plastic mixing bowl, and when you pushed the spring-loaded button on the side (and kept pressing it), the mixers whirred round and round. Once you developed a good rhythm, those beaters could really pick up speed. In retrospect, the racket probably made Mom and Dad second-guess their choice.

I also received a bake set complete with tiny round pans and cake mixes. No Easy-Bake oven for me, though. Mom let me use her real one, with supervision. My little mixer stirred up the cake batter which filled the pans to create cakes the size of large cookies—which, if memory serves, my big brothers could devour in two bites. But that’s okay. They tasted like cardboard.

Many months after Christmas, one of my mother’s friends came to call, bringing her two daughters with her. I dreaded any visit by these particular girls because they had a tendency to rummage through everything in my room, break things, and leave it all in shambles without so much as a word from their mother. Sometimes my mom would take pity and help me clean up afterwards, but she insisted I be kind to these kids and share my toys.

On this particular day, one of the girls decided it would be great fun to take my mixer outside and use it to stir up a sand cake. Of course, the sand got inside the workings of the toy and completely halted its action. We cleaned the dirt out of it as best we could, but my little mixer never worked the same again. And of course, it was useless for real food.

I found it highly unfair that I was expected to extend grace to these destructive kids. At that age, I could not understand the challenges of a single-parent family or the enormous stress the mother of these two faced. I couldn’t fully appreciate the many ways I had been blessed.

I wish I could say this childhood experience made me a more generous adult. I have a long way to go. But one thing I know. We all cause messes. We hurt, disappoint, and take advantage of one another. Too often we do so in oblivion and go on our merry way. Other times, we’re aware of what we’ve done and try to make amends. But even our best efforts frequently fall short, for some things can never be repaired by human hands.

At Christmas time more than any other, we are given the ultimate example of sacrificial grace: the King of kings gives up his throne in Heaven to come to earth as a helpless infant. In scripture, we see Jesus moving toward the messes others made and miraculously coming through for them. He isn’t afraid of our messes, either. He cleans them up and invites us to join him in his work and to pass that same grace to others.

“You must have the same attitude that Christ Jesus had. Though he was God, he did not think of equality with God as something to cling to. Instead, he gave up his divine privileges, he took the humble position of a slave, and was born as a human being.” (Philippians 2:4-7 NLT)
Posted by Terrie Todd at 7:36 PM