Confessions of a Party Pooper


For four days each year, hubby and I are the same age. In between these two birthdays last week, our perpetually cheerful eldest called to suggest he bring the family for lunch at our house, followed by an afternoon of sledding if weather permitted. A sort of combined birthday celebration and a great way to wear out three rambunctious boys on a winter Saturday.

I had planned to get some writing done, maybe a little housework. But I knew the correct answer. How long will it be before the boys would rather stick pins in their eyes than go sledding—or do anything, really—with Grandma and Grandpa?

I bought frozen lasagna, a bagged salad, pop-in-the-oven garlic bread, and a bakery cake. They might be descending on my house and pre-empting my nap time, but I saw no need to be a martyr about it with a home-cooked meal.

I saved my martyrdom for the sledding hill. Though the temperature was a balmy -7, the brutal wind threatened to suck my face off and hurl it down the hill without me. I snapped a few pictures of the others and climbed back in the truck where I belonged.

“This is dumb,” I thought after a while. “If Grandpa can slide down the hill and live to do it a second and third time, surely I can go down at least once. It’s probably more fun than it looks.”

Why anyone would willingly bump down a frozen hill, walloping their tailbone while icy shards stab their eyeballs when they could be curled up by a cozy fake fireplace with a cup of tea and a good book is beyond me. I think I saw my dentures pass me on the way down and I don’t even wear dentures.

I survived my one run and quit while ahead.

From there, we packed everyone off to the river for a wiener roast. This required a fifteen-minute tramp through knee-deep snow pulling sleds laden with lawn chairs and food. Staggering in fruitless attempts to stay upright, I asked the littlest if we were having fun yet.

I plowed on, knowing it was the only way for this adventure to be over.

The fire took a while to begin blazing and I fantasized about the hot bath I’d take when we got home. I knew I should be taking a cue from the boys, running around like they were. Instead, I huddled close to the fire, coughing in the smoke and mentally writing the epitaph for my gravestone: Worst. Grandmother. Ever. 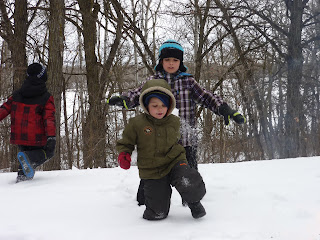 We packed up and began the long trek back, the boys impressing me with their stamina and good spirits in spite of the cold wind, the snotty noses, and the lack of bathroom facilities. Like an old mare returning to her warm stall, I moved much faster on the return trip.

The boys and their parents piled into their vehicle and waved good-bye. Did they see me as nothing but a big spoil sport? Had I crushed their little hearts by revealing the spineless wimp that I am?

It was on my own ride home that it occurred to me. Though I have many clear and fond memories of my grandmother, I cannot say I ever saw her slide down a toboggan hill. Or tramp through deep snow just for the sake of spending time with me. Or eat a hot dog outdoors in February.

I enjoyed that hot bath as if the water came straight from heaven.
Posted by Terrie Todd at 5:02 PM