I was delighted to discover How the Grinch Stole Christmas on Netflix. The one with Jim Carrey. It’s pretty much my all-time favorite Christmas movie. I laughed all over again at parts I’d forgotten or maybe never noticed.

My favorite bit is when the Grinch sets up his dog, Max, to play Santa’s reindeer and goes into his Ron Howard impersonation, complete with ball cap. (Ron Howard is the movie’s director—any wonder it was such a success? I’ll watch anything that guy creates.)

Anyway. The story unfolds. The Grinch’s history is explained, making him a sympathetic character in spite of his contemptible behavior. Cindy-Lou sings the sweetest song ever. The compassion and courage of a little girl raise the bar for all of Who-ville. The Grinch is welcomed into their circle. The mayor is duly penalized for his meanness. The audience is left with the appropriate warm fuzzies. One might say the lesson here is that we need to be kind and accepting toward someone who is different. And that’s not a bad lesson.
But there’s so much more.

I think the lesson is that Christmas comes. Regardless. Ready or not.

I don’t know whether Dr. Seuss intended his story as an allegory, but it works. You see, the very first Grinch was none other than King Herod, the evil ruler who felt threatened by the Jew’s promise of a coming king. He tried to trick the wisemen into disclosing the whereabouts of the Christ child in order to destroy him. When that failed, he had all the baby boys in Bethlehem under the age of two killed. (See Matthew 2 for the full story.) Talk about contemptible behavior.

Try to imagine this occurring in your home town. I’ve got a grandson in that category. Unthinkable, right? Not a family would go unaffected. Not to mention the soldiers who were ordered to carry out this mass murder. I’m sure no one called it “Post Traumatic Stress Syndrome” back then, but I’m certain it existed just the same.

But even that evil scheme didn’t work. Christmas came anyway.

Christmas came because Jesus gave up everything to come here and live and teach and do miracles and then, ultimately, to die for us. He knew what he was in for. He did it anyway. Out of love.

So I suppose one reason I like this movie so much is because when I see all the Whos in Who-ville gathered around the tree singing—I know I’m one of them. I stand in church on Sunday mornings with my fellow believers and sing about the one who brought us Christmas. And I know one day we’ll be gathered around his throne, relishing eternal life, peace, and freedom. Because he came. Anyway. 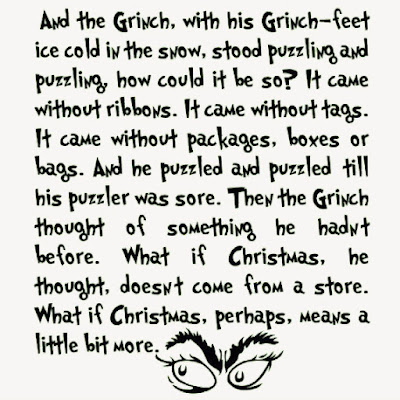