The other day, I came across this definition of hell from an 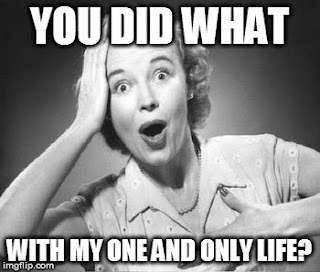 It was meant to motivate us to achieve our potential. But that could go either way, couldn’t it?

Let’s say today is my last day on earth and I get to meet this fabulous person I could have become. Let’s say she’s accomplished far more than I did. She’s published hundreds of novels that have sold millions of copies because she started much earlier and learned the craft at a younger age. Her marriage, family, and friendships are thriving because she invested in them selflessly. She’s physically fit because she resisted all that junk and applied herself to exercise. She licked all her issues with jealousy and resentment years ago. No one’s heard a sarcastic comment from her mouth in decades. She’s fearless. She’s kind and encouraging and genuinely compassionate. Her social calendar is full, because people can’t wait to spend time with her. She’s overflowing with energy, daily extending generous hospitality in her well-appointed home.

I kind of hate her.

And I suppose that would be hellish torture, knowing it’s now too late.

But what if the person I could have become is entirely different? She’s all alone because she gave up on her marriage. She’s worried about becoming homeless because she just couldn’t handle work anymore and there’s no money coming in. She quit writing because the rejection and criticism were too much. She’s turned to alcohol for an escape. She smokes because it settles her nerves. She rarely gets off the sofa (which, by the way, is covered in cat hair) because all that weight is just too challenging to move around. She’s wallowing in self-pity and takes it out on her children who never come around or call. Convinced life has dealt her an unfair hand, she’s well known on social media and at the public works department for her constant complaining and demands. Even her cat is growing weary of her company.

It’s not really that big a stretch to think I could become her. Well, except maybe for the smoking part. Eww.

Frankly, both scenarios are a little depressing.

Here’s the thing. God made each of us with far more potential than we can imagine. And no matter how hard we work, we will never live up to it while we’re on this earth because we are broken people in a broken world. It’s great when we can rise above circumstances, when we can achieve much through our diligence. But if this life was all there is, I don’t think I’d be motivated to do or achieve anything. What would be the point?

I’ve got something better driving me.

You see, I’m not going to meet the person I could have become. I will become the person I could have become—when (and only when) I meet my Creator face to face and he finishes transforming me into the me he had in mind all along. All the hang-ups gone, forever. A perfect new body. A heart that carries inside it only love. A mind that knows only truth. Joyful. Radiant. And the more I can look like her in this life, the easier it will be for my friends to recognize me in the next.

2017 has arrived. Maybe today won’t be your last on earth, but it’s coming. Sooner or later. And each day between now and your last can make you a teensy bit more like the person your Creator had in mind—if you let him begin his transformation work now. Ask him.

“He will wipe away every tear from their eyes, and there will be no more death or mourning or crying or pain, for the former things have passed away.” And the One seated on the throne said, “Behold, I make all things new.” –Revelation 21:4-5
Posted by Terrie Todd at 8:53 AM