Farewell to City Hall (Or, How to be an utterly UNdelightful citizen...)

I began my role as Administrative Assistant for the City of Portage la Prairie on March 30, 2009. To make it an exact decade, I picked March 29, 2019 for my last day. I’ve held the same position and worked at the same desk all this time, something that might cause younger people to ask, “What’s wrong with you?”

Though I came in with the required administrative skills, I knew little about municipal government in 2009. I’m forever grateful to have had the privilege of completing the Manitoba Municipal Administrators certificate program—a big deal for someone who skipped university in her youth. I deeply appreciate those who took a chance on me and patiently taught me what I needed to know—especially Sharon Williams, Dale Lyle, and Nettie Neudorf. I’ve worked with three different mayors, three City Managers, and two Managers of Administration. (Sorry if I frightened you all off.)

It’s also long enough to form a few opinions about what makes a less-than-helpful citizen.

If your deepest desire is to be a horrible citizen, consider these tips.

1.     Don’t Vote. Since most Canadians vote at every opportunity, be different and take this so-called privilege for granted. The 40.6 percent voter turnout in our last civic election was way too high. I think Portage could bring that down to 25 percent with little effort. The biggest advantage to not voting is that it earns you the right to grumble about every pot hole, parking ticket, and crime in your neighborhood. See how that works?

2.     Complain as often, as loudly, and as disrespectfully as you can. They’ll try to tell you the person who voices their concerns sparingly and with genuine respect will be heard above the chronic complainers; that a wheel’s squeak can become so constant it’s merely white noise. Don’t you believe it. You’ll need to ramp up that squeak to get the grease.

3.     Whatever you do, under no circumstances should you talk to God about your elected officials or city employees. Regardless of what they claim, they are not regular human beings who need encouragement, appreciation, wise advice, or respect. The guys fixing our sewer pipes in frigid temperatures or in the blazing sun love every minute. The clerks on the receiving end of your verbal abuse about issues over which they have no control eat that up like candy. So save your prayers for those who matter. Like the Jets.

As for the rest of you? Just do the above, except the opposite.

Imagine what our community could look like if we all considered ourselves “public servants” in the simplest and purest form of the phrase. A song we sing at my church says, “Greater things have yet to come, and greater things are yet to be done in this city.” As I transition into my new life as a full-time writer working from home, I hope to remain part of those greater things with my votes, my words, and my prayers.

Thank you, Portage, for these past ten years at your service. It’s been an honor. 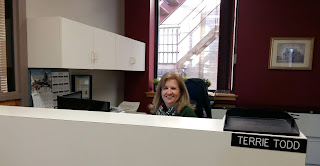