Explaining Social Media to My 15-Year-Old Self

My one- and three-year-old grandsons in Calgary don’t question how their grandmother can appear on their mom’s cell phone screen and talk to them from far away. Why would they? As I watch them so naturally engage with technology, I imagine describing it for the kids of the 1960s and 70s. The following script springs to mind as I try to explain social media to my 15-year-old self. Since my initials back then were “T.O.”, I’ll call my young self TO and my current self TT. 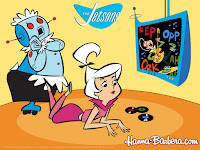 TO: It folds into a little suitcase, though, right?
TT: Um, no. Although those little smart cars are getting closer. They’re just not that smart yet.

TO: Bummer. Do we go from room to room on people movers?
TT: Not unless we’re at the airport.

TO: Do we have a robot maid? Is her name Rosie?
TT: No, we have a human maid. Her name is Terrie.

TO: Do kids watch TV on their wrist watches?
TT: Well…they can. Hardly anyone wears a watch anymore, though. If they do, it does a lot more than tell time. Most people just use their phones.

TO: What do you mean, their phones?
TT: Our phones have little screens on them, so…

TO: A computer? Computers don’t have screens. And they weigh a ton.
TT: Not anymore. You can carry them around in your pocket now, and nearly everyone does.

TO: You must need an awfully long cord!
TT: No. They’re wireless.

TO: Wireless? You mean like a transistor radio?
TT: Sort of, yes. And they do it all…make phone calls, tell the time, the weather, send text, take pictures—

TO: Yeah, right.
TT: No, really. You can look up stuff on the internet—

TO: What’s an internet?
TT: Oh, gosh. Let me think. It’s like…an encyclopedia…with everything you ever wanted to know and more. Except you can simply say, “Alexa,” and ask your question, and it will answer you. Or you can ask Alexa to play a certain song or tell you a joke or give you the square root of 104,691. Or you can simply say “call Carl” and next thing you know, you’re talking to Carl.

TO: Far out.
TT: And you can use it to post stuff on social media.

TO: What is social media?
TT: Oh, that’s how you connect with people to share stuff about your life…news, photos, recipes, opinions, links to other things on the internet. People get into big arguments on social media. Even with people they’ve never met.

TO: What’s email?
TT: Oh my goodness. We are a dinosaur, aren’t we? It’s like regular mail, but instantaneous. And without paper. I type it in, hit “send” and it displays on someone else’s screen.

TO: So I guess our typing skills aren’t completely useless.
TT: Not at all. I’ve used them to write books, columns, and more. Speaking of books, we can read those on our phones, too.

TO: Get out.
TT: No, really. You can carry hundreds of books around in your pocket.

TO: Even big ones? Like a Bible?
TT: Yes, even Bibles. In several different versions.

TO: No way. So do you use your phone to talk to God, too?
TT: Um…no. We still talk to God the same old-fashioned way. Directly. Instantaneously. Any time, day or night. No wires needed. Just pray.

TO: So I guess God is ahead of his time.
TT: You could say that. He hasn’t changed. Though you have changed a thousand times, He has not changed once.

TO: I think I’m a little relieved.
TT: I think I am too. Anything else you want to know?

TO: I imagine you’ve done away with bad hair days, moodiness, and all-around general selfishness by now, right?
TT: Sigh.
Posted by Terrie Todd at 5:53 PM