That Time I Ran


Did I ever tell you about the time I ran faster than a car? I was about six years old, barrelling downhill full bore through our yard. I discovered that when I really applied my turbo jets, I could go faster than a car. Definitely faster than any human had ever run before. Too bad nobody was around to clock me.

When I employed the same effort in the hundred-yard dash at my school’s field day, I discovered to my dismay that others could outrun me. Throughout the next eight years of athletic competition, I was awarded precisely one ribbon: third place in high jump. Maybe I was one of only three competitors. Or perhaps my height gave me an advantage. In any case, I eventually accepted the fact that not only would I never be a runner, but I would never be an athlete. I’m fine with it.

Perhaps that’s why it is completely mind-boggling to me how Terry Fox, whose legacy we honor this weekend, could have had the determination to run his Marathon of Hope after losing a leg to bone cancer. While digging into his story, I discovered he was born in Winnipeg but raised in B.C. I learned that in grade 12, he won his high school’s Athlete of the Year award jointly with his best friend Doug Alward. Still eighteen when diagnosed, his right leg was amputated fifteen centimeters about the knee in 1977. 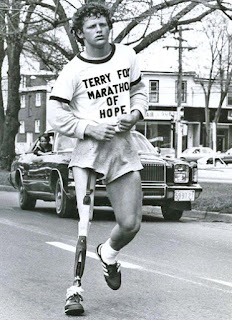 It was seeing first-hand the suffering caused by cancer, especially to children, that inspired Terry to do all he could to end cancer. He trained for a year and a half before beginning what he hoped would be a cross-Canada run to raise funds for research, starting in St. John’s: a full marathon every day. I can remember his story gaining momentum as he made his way across our country, and how sad it was when he had to stop running outside Thunder Bay (after 143 days and 5,373 kilometers) because cancer had appeared in his lungs. I remember how stunned we all felt when he passed away on June 28, 1981. He was 22.

His legacy, of course, was only beginning. The Terry Fox Foundation has kept working to achieve Terry’s dreams. His initial goal was to raise a million dollars. To date, over $750 million has been raised for cancer research in Terry’s name through the annual Terry Fox Run, held across Canada and around the world.

I can’t help wondering whether any of us would have heard of Terry Fox if he had never contracted cancer. Was he talented enough to have become a national champion? An Olympian? Given his gutsy nature, it’s possible—but not likely. And even if he had earned a gold medal for Canada, how many of us would remember it now, nearly forty years later? Yet hearing the name “Terry Fox” easily summons the picture of that curly-haired young man with the awkward gait and the obvious pain and determination emblazoned across his face. He inspires us, not because of his great athleticism, but because of what he did with what he was dealt.

Life throws tough stuff at us, doesn’t it? No one is spared. What might happen if you took your tough thing and turned it into something good for others? I believe we can always find a way to do so. It will take time. It might not result in becoming a household name, or in raising millions of dollars for a cause. But if you can bless even one other person by the way you handle your tough thing, then your tough thing will not be in vain. You will grow. They will grow. And the enemy of your soul will not win.

The world calls it making lemonade when life hands you lemons. Obviously, it’s not as simple as adding sugar and water. The lemon must be squeezed dry. Think about it. Your tears are never wasted when you ask God to use your affliction to encourage others. (See II Corinthians 1:4.) He’ll show you how. Maybe he’ll even have you, figuratively speaking, running as fast as a car.
Posted by Terrie Todd at 4:59 PM