Jobs That Taught Me About Life, Part 6: The Chemist


It was the oddest setup: a company that sold swimming pools but operated out of an office in Longview, Texas. When customers stopped by expecting to see a store with a display pool and shelves of chemicals and pool toys for sale, they often thought they’d walked into the wrong place. Although a display pool would be built later, for now they took prospective customers out to view residential pools they’d built. They needed someone who could handle their calls and a certain amount of paperwork, as well as direct visitors to the other businesses in the building. I felt thrilled when they offered the position to me since it seemed like a huge step up from McDonalds. Plus, there was a pretty red phone on my desk.

Still unaccustomed to the southern drawl, I took a message one day from someone named Montel Siggs. I asked him to repeat his name to make sure I got it right, but when my boss read the message he scratched his head, trying to recall anyone named Montel Siggs. When he dialed the number and they picked up, he burst out laughing. The person on the other end had answered with, “Motel 6, how may I help you?”

My boss decided he could get a better bang for his buck if he trained me in pool chemistry so I could help clients when he wasn’t around. He sent me to Dallas to take a two-day training course from our supplier. My husband came as my chauffeur, and it felt like a grand prize for us to enjoy an all-expenses paid trip. Hubby decided to sit in on the seminar too, which saved my hide in the end. The course assumed one had taken basic high school chemistry and I had not. (Hubby had not, either, but Hubby is a brainiac.) It also assumed the students paid attention and didn’t spend the day dozing and daydreaming.

That evening as I studied for a test I felt sure to fail, Hubby explained everything we’d covered in class. The next day, he aced the test and I managed to pass. I returned to my boss with a certificate proving my expertise in pool chemistry. 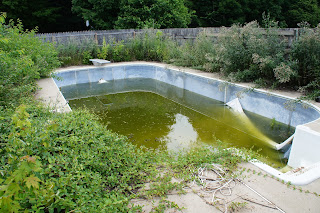 My first client’s pool looked like pea soup with a cloud of mosquitoes hovering three inches above. But with my expert help, they could soon enjoy clear sparkling water. What a fun challenge! How amazed would they be when I miraculously turned their green swamp into a glorious, shimmering oasis? I tested a sample and laid out the prescription. When I returned two days and hundreds of dollars later, the water had improved to the point where you could actually see your hand below the surface…provided you were brave enough to stick your hand in it.

My customer was not impressed.

I suggested more chemicals, but he would have none of it. He took it up with my boss, who was kind enough to deal with it and not give me a hard time. After that, I stuck to selling chemicals to people who already kept a well maintained pool and left the fatal cases to others.

One of our building’s more eccentric tenants was a hypnotherapist. This guy specialized in helping people quit smoking or lose weight by hypnotizing them in private sessions. He freaked me out, but I refused to give him the satisfaction of knowing it. One day he asked if I was connected to Lee Harvey Oswald, the assassin of President J.F. Kennedy 16 years earlier in Dallas.

He said he was receiving some kind of “vibe” about it whenever he came near me. Later, after I figured out that he’d seen letters addressed to my parents in my outgoing mail tray, I felt like vibing him right in the jaw.

I left that job looking forward to becoming a full-time mommy and finally getting enough sleep. But that’s a story for another day.
Posted by Terrie Todd at 7:01 PM No comments:

Jobs That Taught Me About Life, Part 5: McDonalds


It was 1978. I sat in the darkened basement of the McDonalds Restaurant on Marshall Avenue in Longview, Texas, watching the training film flicker on the collapsible screen. I learned the history of the company, how to smile and take orders and—gulp—upsell by suggesting an order of fries and a drink to folks who ordered only a burger.

Working in a fast food joint seemed like a good solution for a starving student’s wife until I learned we had to pay full price for anything we ate. I began packing my own bologna sandwiches and learned to work with a rumbling tummy. “Free Meal” cards were sparingly handed out for special rewards. Just once, I earned one for having the perfect amount of change in my drawer at the end of my nine-and-a-half hour shift.

One day we received a call that a bus-load of football players was on its way. The crew in the back scrambled to assemble dozens of Big Macs and fill the fry bin, while out front we began pre-filling large cups of soda to the brim. When the burgers remained in the bin after their expiry time passed and we still hadn’t seen the bus, I thought my heart might break as we filled garbage bags with the unsold food, counting every Styrofoam box and recording it on the waste form. We learned later that the bus had shown up at the McDonalds across town—which had not received a call and was not prepared.

The polyester uniform seemed like a good solution for a starving student’s wife, too, until I learned I’d need to buy my own navy or black shoes. I stopped at a department store and bought the cheapest pair I could find. They were comfy, but made of nylon that allowed no breathing room. By the end of my first week, the shoes stunk so bad I left them out overnight to fend off burglars. And since my weekly trips to the laundromat were not frequent enough to keep the uniform fresh, I learned to swish it around in the bathtub each night and hang it up to dry.

I was to punch my time card and be at the counter, smiling and ready to take orders before 6:30 each morning. I learned to keep the coffee pots going continually and fill any momentary lull with counter-wiping and cup dispenser restocking. No standing idle, no drinking water in sight of the customers, no chit chat. And never, ever stop smiling.

I got two fifteen-minute breaks for which I needed to punch in and out, neither of them over the noon rush of course. By the end of the first day, I thought I’d die. I complained of sore feet to my parents over the phone. After a month, Dad asked me if I’d grown used to being on my feet.

The neatest learning experience coming out of that job came from the mostly African American staff. It was an education to be a minority for the first time in my life, to discover that the others could easily communicate without my knowing what was going on if they wanted to, and that they possessed a sense of humour I could only hope to emulate. I was the dumb white Canadian to be taken under wing, and I could not take myself too seriously if I wanted to get along.

I earned $3.10 an hour. When evaluation time came, Management gave us grades for our work. An ‘A’ grade meant a ten-cent raise. ‘B’ meant room for improvement while you continued at your same pay rate. ‘C’ meant a cut in pay (yes, they could actually do that) and ‘D’ meant you were fired.

Confident I’d soon be taking home an extra 95 cents a day, I went to my appointment smiling. But left in tears.

My manager had given me a ‘B’ and told me I needed to do more upselling. I’d been on the job nine months, and this news was all the incentive I needed. I spent my days off applying for secretarial positions until I was hired by a guy who sold swimming pools.

But that’s a story for another day.
Posted by Terrie Todd at 5:50 PM 1 comment: