Our lives haven’t exactly been a whirlwind of activity since my last report, although we’ve added four places to our kissing list: church (after the service, not during); my sister Shanon’s house (with an audience of extended family); the sidewalk outside the Learning Centre where Jon works (where one of the students happened to be walking by and was no doubt grossed out); and the back seat of our friends Shaun and Tracy’s car. They were completely scandalized.

Besides adding to our kissing exploits, we’ve checked off just one item from our list of forty things to celebrate our fortieth year of marriage. We did it together with Shaun and Tracy, which is how we ended up in their car.

It was Item #4: “See The Shack.” I had added it to our list as soon as I heard the movie was coming out, knowing we’d want to see it. We first read the book in 2008 and heard its author, William Paul Young, speak at a Breakforth conference in 2009. I enjoyed the book well enough. But Jon found it transformative and re-read it and listened to it numerous times in the intervening years. And yes, I’m quite aware there’s much controversy about the author’s theology and whether or not the book and movie are heretical. I am not here to argue and will refuse to engage if invited. It’s fiction, okay? Love it or hate it, but take it as an engaging story and don’t make it your new Bible.

The four of us discussed the movie over crepes afterwards and on the hour-long ride home. We agreed it was well done, well cast, filled with hope, and true to the book. My favorite part is when Jesus is trying to coax Mac to get out of the boat, and Mac is afraid. He's seen scary things in the water.

“You are imagining a future without me in it,” Jesus says. “Such a thing does not exist.” 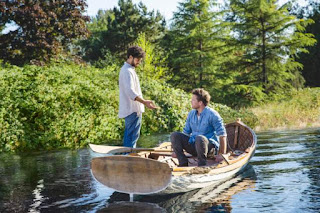 That’s exactly it, isn’t it? Every time we’re worried or afraid or simply cannot face another day, we are imagining a future without Jesus in it. And such a thing does not exist.

When I look back over my life, every moment—from the best to the most rotten—he’s been there. Even when I doubted his presence. So why should I think there will be any moments or days or tragedies in my future where Jesus will not be there to see me through? How I need this reminder!

Stay tuned for more anniversary adventures throughout 2017.
Posted by Terrie Todd at 7:51 AM No comments:


Hubby and I will be marking our fortieth anniversary in 2017, which is a miracle on so many levels—not the least of which is the fact that only a few years ago, the only people who got to celebrate fortieth anniversaries were old. Now, even kids like us are doing it. I think it has something to do with the weird time warp that happened when we flipped to a new century. And they thought Y2K was a non-event.

Anyway, we decided we’d spend the whole year celebrating with a list of 40 activities to do together—some big, most little, a few crazy. Some definitely outside our comfort zone. In no particular order.

And of course, I’ll take my readers along for the ride. Vicariously, I mean. 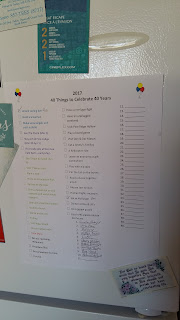 So here we are, more than two months into this fortieth year and we’ve only checked off two things. Unless you count Item #40, which is “Kiss in 40 Places Outside the House,” followed by 40 blank lines, ten of which have been filled in. We’ve kissed in the CanadaInn parking lot, Stride Place, the airport, our son’s house, outside our bank, on the sidewalk on Garry Street in Winnipeg, the McNally Robinson parking lot, Grant Park theatre, the Pony Corral restaurant, and behind City Hall. So we’re on track with the kissing thing even if Hubs isn't a fan of public displays of affection. We’ll have to step it up a notch in order to cover the remainder of the list.

Item #39, “Do a Jigsaw Puzzle,” has not been checked off yet, but it was begun last Christmas Eve and is still in progress—much to my annoyance—on our dining table.  Jon has done the lion’s share since I have the attention span of a Chihuahua when it comes to puzzles. 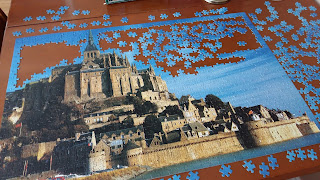 Item #1 was accomplished on February 12, although it was a bit of a cheat, since it wasn’t actually on the original list. The mayor offered me two free tickets to the Men’s Provincial Curling Championship—any game. We hadn’t watched live curling in years, or curling at this level ever, and thought it would be fun to do something different. We added it to our list in place of something we were pretty sure we couldn’t pull off.

And it was fun. It’s mind-boggling how the curlers can get so expert at a sport that comes with so many crazy variables. We chose the final draw and got to watch Mike McEwen lead his team to the championship win. Although I gotta confess, it might have been more interesting to watch the one where a temper tantrum taught a player a tough lesson. 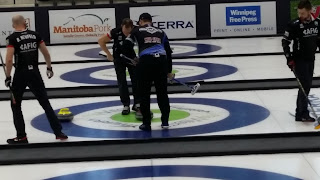 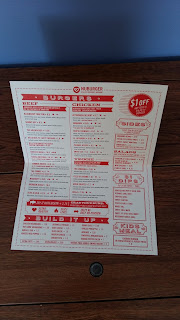 Item #37. We’ve also crossed off “Eat at Nuburger” and declared their burgers the best ever! There are three locations in Winnipeg; we went to the one in Osborne Village. Formerly known as “Unburger,” they changed their name when people assumed they were vegetarian only. I’d have drawn the same conclusion. (They do have vegetarian options, but their beef, chicken, and bison are locally raised.) Hubs had the “Deliciousmosttastious Bacon Cheddar” and I had the “Delicious ‘n Tasty Cheddar” on fantastic multi-grain bread. We brought home a menu and will definitely want to return to try some of their other combinations. Fantastic!