The women of the Amaranth Gospel Mission, the church in which I grew up but had not visited in decades, were planning a ladies’ day out and discussing whom to invite as guest speaker. One of the leaders, Shirley, had a potential speaker in mind and mentioned her name to the others.

No one said a word.

Did they even hear me? she wondered.

The next day, she received a text from one of the other women: “Have you thought about inviting Terrie Todd?”

Shirley had not. And she wasn’t sure she wanted to. But, she was willing to pray about the matter. While she waited for more direction from God, she decided to tackle the job of preparing that Sunday’s church bulletin. She always likes to include a seasonal poem or brief story in the bulletin. It was Thanksgiving weekend. What could she find?

She Googled “Thanksgiving devotionals.” One of the sites that came up was called Thoughts About God. Shirley figured that sounded as good as any, and went to the site. She clicked on “Thanksgiving” and began scrolling through the titles of articles listed under that theme. One called “Better Late than Never” caught her eye and she began to read.

Shirley quickly realized the piece was much too long for her bulletin, but the story had already pulled her in. It told about a mother receiving a hand-written thank you card from a daughter. Shirley had recently spent a great deal of time writing her own mother a lengthy letter of gratitude, so the story held great significance for her. She read the whole piece and felt blessed. At the end, she found the author’s name.

You’re way ahead of me.

It was the answer Shirley needed. She called me, but did not reveal that story because she didn’t want it to influence my decision. She extended her invitation and I told her I’d pray about it and return her call the next day. It wasn’t until after I’d hung up that I began to see God was up to something—as I wrote about in last week’s post. Would a visit to Amaranth be another piece of my “slide show?”

I called her and said yes.

Shirley waited until the end of our day together to share her story with the whole group. I was astounded, but not as much as I was a couple of days later.

With a bit of effort, I tracked down the site where she’d found my story. I remember writing it, but it would have been twelve years ago—long before I had a column or a blog of my own. I probably wrote it for my church’s newsletter, which was not online. I keep meticulous records of work I submit for publication, but I found no record of publishing that story anywhere. Yet there it was.

And of all the gazillion options that might come up when one Googles “Thanksgiving devotional,” how did Shirley unwittingly come across mine?

You can call me crazy, but I believe God orchestrates these things. He knows how desperately our feeble hearts need affirmation that we’re on the right track. He guides in ways we can’t figure out, and it makes us love him more. The enemy of our souls will tell us every lie in the book, and they can sound so true. But he can’t do what only God can do.

“As a father has compassion on his children, so the Lord has compassion on those who fear him; for he knows how we are formed, he remembers that we are dust.” (from Psalm 103)
Posted by Terrie Todd at 8:41 PM No comments:

I’ve experienced another one of those God things. You might call it coincidence or karma or luck. I prefer to see it as the work of a wild and mysterious creator who loves me and wants to be involved in my daily life, revealing himself in crazy ways I could never orchestrate. Doesn’t that sound a lot more inviting?

This story has two parts. First, mine.

I’ve been hearing a Steven Curtis Chapman song on Christian radio called “Remember to Remember.” As I anticipate my sixtieth birthday in February, I decided this song should be a theme for the next year as I enter a new decade. I want to look back and remember God’s faithfulness to me in good times and hard times, and I want to remember I can trust him for whatever lies ahead.

While it played one day, I said, “Lord, I wish I had a slide show of my life running before my eyes as I listen to this, because I don’t always have the best memory.” But let’s face it—while we might keep photographs of our mountain-top days, nobody takes pictures when you’re in the valley. When you’re face-down on the carpet sobbing, or you’re in so much physical pain you pray for Jesus to take you home because you don’t know if you can stand it another day; when you’re so angry you want to choke someone. You don’t generally want your photo taken in those moments. But we need to remember God carries us through them just as much as he leads us to the mountaintops.

Well, God hasn’t given me a slide show. He’s done something I never expected. In September, Jon and I attended a reunion at the Christian high school we both attended in South Dakota. The homecoming was for alumni from the entire decade of the seventies, so we saw a lot of old and dear friends, both former students and staff. We reminisced, hugged, laughed, cried, shared, and worshiped God together. I returned home with a full heart. (You can read more about that here.)

The next time my song played was a light bulb moment. I said, “God, you gave me something far better than a slide show. You actually took me into my past, to a place I hadn’t been for years, with people I hadn’t seen in decades. Thank you!”

The next day, I received a call asking if I might come to Amaranth to speak at a women’s event. Amaranth! My childhood! I couldn’t remember the last time I’d been back or seen inside the church I grew up in, the place my grandfather helped build and through which my family came to know Jesus.

The theme of the event was “Time Well Spent” and I shared some things I’m learning about time. We made a craft and enjoyed a foot spa and a lovely meal together. During the wrap-up, I explained how much it meant to be invited and shared Chapman’s song with them. I was flooded with memories as I snooped around the church.

What do you suppose God will add to my “slide show” next?

In her book Defiant Joy, Staci Eldredge says, “…when we forget who God is, what He has done, and who we are in Him and to Him, we put ourselves in great peril. We cannot live well nor arrive at the end of our journey triumphant unless we remember.”

He’s helping me remember his faithfulness in cool ways. But this story gets even better. Shirley, the woman who called to invite me to Amaranth, told her side of the story. Blew me away. But it will have to wait for next week. 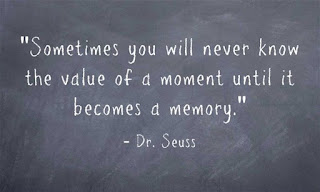 Posted by Terrie Todd at 7:05 AM No comments: