So I was all snuggled down in bed with my late night mug of tea, reading Deborah Raney’s Another Way Home (Book 3 in her Chicory Inn series), when I quite literally laughed out loud. The scenario between the middle-aged characters, Audrey and Grant, could have been a page out of my life and I had a funny suspicion something close to it may have played out in the Raney household as well.

Grant has just returned home with bags of household supplies from Walmart, requested by Audrey.

He returned a minute later with another load of department store bags. “I saved you the trouble of buying me new skivvies.”
“That was thoughtful of you.”

The scene gets funnier, but I won’t spoil it for you. The part that triggered my memory was Grant’s doing his wife a favor by purchasing his own underwear, and her response, which—although not stated—could only be interpreted by my wifely mind as dripping with delicious sarcasm.

Having married at the ripe age of 18 and 19, Hubby and I never lived on our own. So when we took up housekeeping and life together, we each automatically assumed the role our same gender parent had played and depended on the other to do the same. I guess his mom had always bought his gitch and it took me only thirty years to start questioning why I was doing this for him as well.

One day when he announced his underwear was full of holes and needed replacing, I declared my freedom.

“You’re a big boy. You can buy your own underwear from now on,” I said. Or something to that effect. I may have included a rant about how I worked full time like he did and wasn’t it enough that I washed, dried, and put his gitch away?

Well, technically, we have a machine to wash and dry them. But still.

But as the weeks went by, I kept noticing the same old ratty gitch showing up in the wash and no new ones making their appearance. I didn’t mention it, but I refused to give in. I don’t know how many weeks went by. Maybe it was months. Neither of us mentioned the underwear situation.

Then one day I was in Walmart for some other things. I must have been in a particularly benevolent mood that day, because as I passed by the men’s section, it occurred to me that it would take ten seconds to grab a package of the underwear Hubby liked and toss it into my cart. Was this really a hill worth dying on? Surely I could be the bigger man and swallow my pride this once.

I did it, proud of myself for conquering my own stubborn spirit. 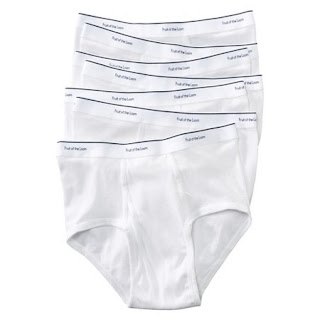 When I got home late that day and walked into our bedroom, Walmart bag in hand, I thought I was losing my mind. On top of Hubby’s dresser sat a brand new package of underwear—the exact duplicate of the package I’d bought.

Without a word, we had both surrendered on the same day.

Hubby was good for underwear for a long time after that. And I can’t help thinking God had a good chuckle.

Author Richelle E. Goodrich said, “If you think the most courageous and difficult thing you can do is stubbornly stand your ground, try graciously giving in.”


For a hilarious three minutes of comedy that only a Canadian can truly appreciate, listen to this Gitch/Gotch sketch from CBC Radio.
Posted by Terrie Todd at 4:30 PM 3 comments: