We’ve knocked three more items off our list since my last update, which brings our current total to twelve. My hope is that whatever we don’t manage to pull off this year will carry forward to next and we’ll have developed a new habit, finally becoming a little less “recreationally challenged.” It’s only taken 40 years!

#29. Eat a Jimmy’s Fat Boy. Anyone who lives in Portage la Prairie knows that Jimmy “the Greek” Sarlas has been an icon for years, as has his establishment, Jimmy’s Submarine and Dairy Delight. But somehow Jon and I had never actually tried one of his famous Fat Boys. Our grandsons’ visit seemed like the perfect opportunity to go to Jimmy’s and not have to cook.

Jon and I shared a Double Fat Boy and an order of fries—basically the equivalent of two burgers and two orders of fries anywhere else, and twice as delicious. And messy. But, oh so tasty. Really, seriously, yummy. And not a bad price, considering it’s all homemade. If I ate a Fat Boy every day, I wouldn’t turn into a Boy, but that other thing? Definitely.

Jon and I didn’t smooch at Jimmy’s, but Keegan reminded me later that while we’d sat in our booth, I’d given Rorin a little kiss on the top of his head. “You kissed the wrong man,” Keegan said.

#33. Pin the Tail on the Bunny. Last summer when this list of 40 things was still a work in progress, we invited our kids and grandkids to add to it. This one was Allistar’s contribution. He’s a huge rabbit fan and has a pet one at home named Thumper. Jon and I decided we’d feel a tad silly playing Pin the Tail on the Bunny by ourselves unless, in Jon’s words, I was the bunny. This isn’t that sort of blog.

So with the grandboys here, we colored a large Easter bunny, stuck magnets to colored pompoms, took turns blindfolding and spinning each other around for a rousing round. I came in dead last. Keegan’s was probably the closest, but Grandpa claims Keegan cheated and used both hands. Competition is fierce around here.

#22. Go Somewhere by Train. Because it sells out early, we booked tickets weeks ago for the Mother’s Day ride on the Prairie Dog Central, pulled by a coal-fueled steam engine over a century old. Departing from the old Inkster Station north of the Winnipeg perimeter, the train took us north for about an hour at a speed of 15 miles per hour (it could go faster, we were told, but they want it to keep working and there’s no place to buy parts!), and let us off in Grosse Isle. There, vendors waited to meet our refreshment and crafting needs while “Fire and Ice” provided live music. Museum buildings were free for the touring—an old home, school, and church. Young passengers enjoyed a petting zoo and miniature train. 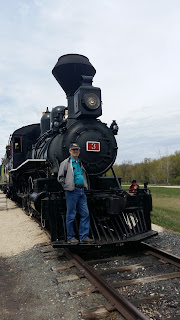 As for me, I decided a new bauble to commemorate the day was in order and found the perfect item from the lady selling jewelry: a little pewter nest with three eggs to represent my three babies. I love it! 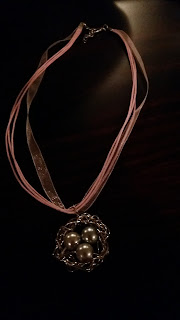 After 90 minutes, they called “All Aboard!” and we rode back, this time on the tail end instead of the first car behind the engine. The black coal smoke has quite the distinct odor that I’m sure triggers memories for those old enough to remember. While my extroverted husband chatted with the other passengers, I was content to sit quietly, imagining I was April or Bernadette or Emmaleen—the main characters in my current novel in progress—traveling in the style they would, right down to the pine wood interiors of the train cars to the pot-bellied stove in each car—thankfully, not in use.

I’m so glad we went, and I recommend it for all ages. Of course, it provided us with a new place to kiss—inside the train, as well as at Grosse Isle. So we’re making good progress on the kissing list.

The unfinished jigsaw puzzle, however, is still sitting there. I swear it scowls back at me every time I walk by.

Posted by Terrie Todd at 8:13 PM No comments:

That darn old jigsaw puzzle is still monopolizing our dining table, but we crossed a couple more things off our list of forty.

#34. Read a classic together aloud. It took six weeks and two renewals at the library, but we finally finished Black Beauty. Not what we expected. Jon thought he’d read it as a kid, but soon realized he was thinking of The Black Stallion by Walter Farley. Black Beauty is a horse’s “autobiography” and at first, it was hard for me to look past the writing style of 1877: sentences that drag on for paragraphs and paragraphs that drag on for pages.

Once we realized the book made such a strong statement on animal cruelty, I said, “I wonder if Anna Sewell was trying to do for horses what Harriot Beecher Stowe did for slaves when she wrote Uncle Tom’s Cabin?” After we finished and I did a little research, it became clear that I was not alone in those thoughts. With fifty million copies sold, Black Beauty is considered one of the best-selling books and the most influential anticruelty novel of all time. Standard practices for cab horses, in particular, changed for the better following its publication. For me, it was especially interesting to know it was Sewell’s only novel and that she died just five months after it was published.

Never underestimate the power of a fictional story.

And while we’re on the theme of animals…

#6. Visit the snake dens at Narcisse. It’s common knowledge that wherever there’s a unique point of interest on the planet, the people who appreciate it least are those within a three-hour radius of said point. Narcisse, Manitoba, is known for hosting the world’s largest concentration of snakes, due to a combination of limestone crevices below the frost line where garter snakes can safely hibernate in minus forty temperatures, and nearby marshes teaming with frogs to eat. In spring, the snakes come out to mate and their sheer numbers attract three to four thousand human visitors a day!


Although our kids had gone to Narcisse on school field trips, and even our grandsons had visited, Jon and I had never made the two-hour trip. So we teamed up with our son Nate and his three boys (their mother decided she’d prefer a quiet afternoon home alone to mingling with snakes. Go figure.) The weather was perfect and we enjoyed a sunny picnic before heading out on the three-kilometer hike where you can view four different snake pits from the relative security of wooden platforms. 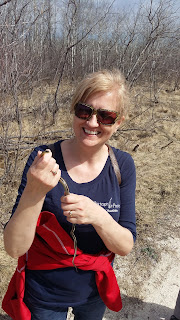 Some say the feelings many women have toward snakes goes back to Eve and the serpent in the Garden of Eden when God tells the serpent, “I will put enmity between you and the woman…” We equate snakes with the devil himself. When I posted this photo of myself holding a snake the next day, the reactions from several female friends were predictable: “I wouldn’t be caught dead,” or “you’re braver than me!” Even my animal-loving mother said she wouldn’t hold a snake for five thousand dollars. I said, “Seriously? For five thousand dollars, I think I’d eat one!” 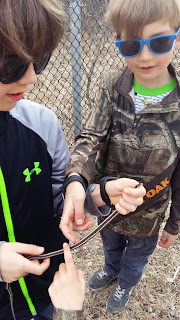 My theory is, it’s not that the snakes are so frightening. We simply hate the “startle” and the speed at which they move when you’re in your back yard and suddenly there’s one at your feet. Or, like the time when I was a kid on my bike and a snake somehow got caught in the spokes of my front tire and flipped up into my face. Not cool. But when you’re expecting to see one—or thousands—the startle factor is gone, and they are simply interesting, harmless little creatures. At any rate, it was a great memory to make with five of my favorite guys in all the world.

Plus, the snake pits gave Jon and me another place to kiss. The kissing list is now up to 22. Eighteen more to go!
Posted by Terrie Todd at 11:48 AM 2 comments: