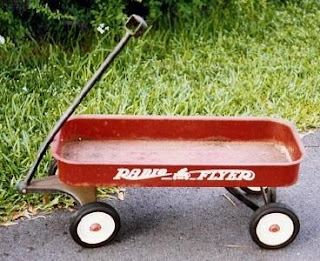 I’m thinking of asking Santa for a Radio Flyer Wagon this year. That is, I might if my wish list were not already filled with books. And if I believed in Santa.

I don’t recall desiring a little red wagon as a kid, but as an adult who tires easily, I can see where a wagon might come in handy, in any color, around the yard and garden. Ever wonder who decided kids might enjoy a wagon of their own with which to let their imaginations take flight?

In 1897, Antonio Pasin was born in Venice, Italy to a cabinetmaker. At 16, he moved to New York City with dreams of operating his own business. Too young and broke, he instead found himself working endless odd jobs for low wages. Not one to give up, Pasin invested his meagre savings in woodworking tools and a one-room rented workshop. He married a fellow Italian immigrant named Anna. They eventually moved to Chicago with two daughters and one son.

Pasin used a little homemade wooden wagon to carry around the tools he used for making phonograph cabinets. When customers began requesting duplicates of his wagon more than his cabinets, he began building toy wagons and selling them to area shops in 1917. By 1923, he’d formed the Liberty Coaster Company. Demand kept growing for the “Liberty Coasters.”

“I enter so many ventures with more nerve than capital,” Pasin said. In 1927, he tore a page from the auto industry’s book and began mass-producing stamped steel wagons. This move made the wagons affordable for nearly every child. Painted red, the wagons sold for three dollars each, about $50 in today’s economy (although a quick look on Amazon shows me a Canadian price of $170 for the classic wagon).

Pasin was a long-time fan of two other inventors: Guglielmo Marconi, credited with inventing the radio, and Charles Lindbergh, who completed the first non-stop cross-Atlantic flight in 1927. In tribute, Pasin renamed his wagon “Radio Flyer.” His company became the Radio Steel and Manufacturing company. Even during the Great Depression, 1500 wagons a day rolled off assembly lines, earning Pasin the nickname “Little Ford.”

“To give work to others,” Pasin said. “That had something to do with my desire to be in business.”

During World War II, production of wagons stopped while the company produced five gallon “Blitz cans” (now known as jerrycans) for the U.S. army. Once the war ended, the company returned to producing the little wagons that have continued to enjoy much popularity for their high quality, nostalgia, and practical usefulness. So popular, in fact, that in 1987 Radio Steel changed its name to Radio Flyer. By this time, Antonio’s son had taken over.

Since 1997, Antonio Pasin’s grandson, Robert, has been CEO. The company has grown to include tricycles, scooters, and more. Though they also began making plastic wagons, the metal ones remain the most popular. In 1999, the Radio Flyer Wagon was inducted into the National Toy Hall of Fame.

Antonio died in 1990 and was inducted into the Toy Industry Hall of Fame in 2003. His little red wagon has shown up in movies and never fails to add nostalgia to any scene in which it appears.

For a heart-warming video that tells Antonio’s story, click here. What moved me most was his desire, having known poverty himself, to provide wagons for as many children and jobs for as many adults as possible.

“Whoever is generous to the poor lends to the Lord, and he will repay him for his deed.” Proverbs 19:17.