A Letter from the Palace


Last week I received a letter from Buckingham Palace. 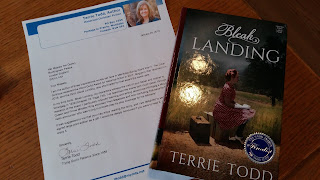 In January, my friend Lucy suggested I send Her Majesty a copy of my third novel, Bleak Landing. The book includes a scene from 1939 when King George VI and Queen Elizabeth (our current queen’s parents) visited Winnipeg. As I researched and wrote about that event, what intrigued me most was how Prime Minister Mackenzie King and Winnipeg’s Mayor John Queen accompanied their Majesties on their various tours. The poor radio announcer, describing for his listeners the actions of the King and the Queen and Mayor Queen and Prime Minister King, got tongue-tied. Rumor has it he grew frustrated enough to swear on air, although that cannot be substantiated.

One hard-cover, large-print edition of Bleak Landing remained on my shelf waiting for the right recipient. I took Lucy’s suggestion and mailed it to the Queen, along with a nice letter. What did I have to lose but a few bucks in postage?

In the process, I learned about royal gift protocol and what types of gifts royal family members can accept. They may, for example, eat any food they receive. Perishable gifts with a value of less than £150 can also be given to charity or staff. Gifts cannot be sold or exchanged and eventually become part of the Royal Collection, held in trust by the Queen for her successors and the nation.

A list of the Queen’s official gifts from 2018 includes over seventy items, ranging from Lego to framed charters to photographs to statues to jewelry to salt. And yes, books. I wonder if mine will be on the 2019 list when it’s released next spring.

I imagined my book becoming one of a gazillion items collecting dust in a gigantic warehouse where some poor scribe must document each one in a dusty, ancient record book with a quill pen. (I also imagined Her Majesty riveted to my book late into the night, while sitting in her royal bed sipping Earl Grey from her royal teacup.)

I would wait and see. 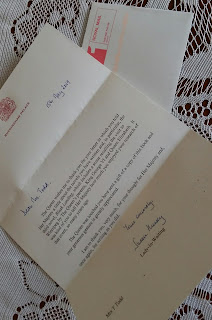 Four months later came the frame-worthy reply, written by Her Majesty’s lady-in-waiting, Lady Susan Hussey. While the letter makes no promise of the Queen or anyone else actually reading my book, it is filled with the gracious thanks one expects from royalty. When I did a bit of digging on Lady Hussey, I discovered she recently turned eighty years old. A baroness herself, she is godmother to Prince William, and has served the Queen basically her entire adult life. One can only imagine how many of these thank-you letters she has written.

As lovely as it feels to receive a letter from the palace, the royal stationary will never match the value of a much finer letter from a far more powerful source. It’s a love letter from the King of kings, and you and I have access to it every day. According to Hebrews 4, the Word of God is alive—meaning it has power to change you, not just once, but over and over. Nothing and no one is impervious to a Bible. Test it out for yourself and see. If Shakespearean English isn’t your first language, find a modern translation like the New International Version or even a paraphrase like The Message. If you’re not sure where to start, begin with the life of Jesus as recorded by Matthew, Mark, Luke, or John. Digest a few verses or a chapter per day.

Then wait and see.