I’ve been at this blog-writing gig so long, I can now write sequels.

Seven years ago, after we moved into our current home, I wrote My Big Hairy First World Problem, in which I discussed the havoc that occurs when one decides to furnish a bathroom with black towels and how, after endless trauma and sleepless nights, I exchanged the black for green. That story went on to win a couple of awards. (It also appears in my book, Out of My Mind: A Decade of Faith and Humour. Shameless plug.)

Seven years later, the green towels were worn out. The whole bathroom needed a facelift. I contemplated painting. A light gray would work well with the flooring and countertop. The problem was the room has four honey oak cupboards—all the rage in the nineties. The oak still looks lovely, and even though everyone who’s anyone is painting their oak cabinets, I refuse. I predict that in a few years, everyone who’s anyone will be stripping their cabinets down to the raw wood again. If I’m wrong about that, I still like the wood. But I didn’t think it would look great next to gray walls.

So I turned to the experts: my Facebook friends.

If you ever want to engage social media, ask a decorating question. At least half the respondents told me to paint the cabinets even though I specified I wasn’t willing to do that. Some named specific gray shades for the walls which wouldn’t appear greenish next to oak cabinets.

I went to the paint store. When I walked in, Phyllis greeted me with, “Hi Terrie. I heard you might be coming in.” Don’t you just love a small town?

Phyllis gave me samples of the gray shades that would work. I also took chips that matched the current wall color, and another to represent the cabinets. I told Phyllis that if I decided to paint, I’d be back. Armed with all those chips, I headed for a bed and bath store in Winnipeg. By buying from a specialty store, I hoped to avoid a repeat of my towel fluff fiasco from 2013.

The store displayed floor-to-ceiling towels in every color of the rainbow. But every time I chose a color, there’d be no matching washcloths, or they’d be short the number of hand towels I needed. Or something. I grew hot in my face mask and nervous about keeping my distance from other shoppers. My stomach growled. I wanted to lie down on a bedspread and nap. I found it ironic that a store specializing in bathroom furnishings had no bathroom. Argh! I grabbed a shower curtain with a gray and paprika pattern, then some towels and rugs that matched the various paint chips. Loaded my cart, paid the much too expensive bill, and left the store.

When I got home and hung everything, my bathroom looked like somebody had barfed on a pizza. How can I be so bad at this?

Furthermore, the idea of painting around all those fixtures and cabinets was growing increasingly overwhelming.

Long story short, everything went back to the store. Instead, I shopped locally and spent less. Found the right number of soft, fluffy, charcoal gray towels with rugs and shower curtain. Even found a gray candle, scented like sandalwood. I added a few small touches and I love it—without painting a thing! This time, I wisely ran the towels through the washer and dryer four times before their first use. They’re still giving off lint, but nobody has hinted it’s time for electrolysis, so I think we’re safe. Unless my friends are just too polite.

The lessons? Sometimes a simple change is all that’s needed, and shopping locally really is best.

“Godliness with contentment is great gain.” (I Timothy 6:6) 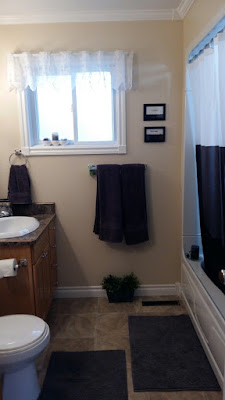