AT LEAST I DIDN'T BURN 'EM

Forty-three years ago, on October 1, 1977, I walked down the aisle on my father’s arm and said “I do” to Jon Todd. He told me and everyone present that he did, too.

We traveled to Texas for a honeymoon that doubled as a scouting trip to the college Jon would be starting in January. Back home a week later, it made little sense to look for our own place for less than three months, especially when my parents offered to let us live in their motor home. It sat parked in their front yard, but it was ours—in the playing-house sense of the word.

As the weather grew colder, we stubbornly tried to maintain our autonomy, burning through tanks of propane to keep the furnace going.

While I had a job in town, Jon worked on his parents’ farm 45 minutes away. Often, suppertime came at nine or ten o’clock. One night, too exhausted to do a proper job of cleaning the motor home’s little kitchen, I tossed a pan of leftover biscuits into the cold oven to deal with the next day.

But that night, winter hit with a vengeance and our propane ran out in the middle of the night. Enough was enough. We hurriedly moved into a spare bedroom in Mom and Dad’s basement.

After Christmas, we loaded all our earthly belongings into my green 1974 Dodge Dart and headed for Texas as planned. Ironically, we could have survived nicely in a motor home through the Texas winter, but we found a furnished apartment we could almost afford and set up housekeeping for real. When the semester ended, we let the apartment go and returned to Manitoba for the summer. This time we rented a little house while we both worked on the farm.

One weekend, we joined my parents at the beach where they were camping in their motor home. It must have been their first camping trip of the season. We had barely climbed out of our car when my mother greeted me from the steps of the motor home.

“Terrie,” she called out. “Your biscuits are done!”

In her hands she held the pan of biscuits I’d left in the oven six months before.

I’m not sure what became of them after that. Maybe somebody commandeered them for hockey pucks. That pan of biscuits continued to bring us laughs over the years, albeit at my expense.

I couldn’t begin to count the number of biscuits I’ve made since then, but 43 years times three meals a day totals over 47,000 meals.

Doing an average of six loads of laundry a week for 43 years works out to 13,416 loads.

Weekly cleaning of bathrooms, and for most of these years we’ve had two, comes out somewhere around four thousand toilets cleaned. Not counting the decade I spent cleaning other people’s bathrooms.

Anyway, where was I going with this? Oh yeah, the biscuits. Though I rarely make them anymore, I’ve never found a biscuit recipe to beat this one. So in honor of our anniversary, I thought I’d share. 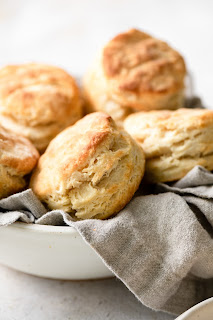 Mix dry ingredients together first. Blend in shortening with pastry blender or fork until crumbly. Stir in milk, don’t over mix. Roll dough out and cut in circles with a biscuit cutter or glass. Bake at 450 degrees F. for 10-12 minutes. Makes 12. OPTIONAL: After the meal, return leftovers to the oven for six months. Write the story 43 years later.

“Better a dry crust with peace and quiet than a house full of feasting, with strife.” Proverbs 17:1 (NIV)