In the fall of 1986, I was the mother of two pre-schoolers with another on the way. Christmas was coming. Money was tight. What I did have was a new Pfaff sewing machine. My father had died earlier that year and we’d received a bequeathment. I knew I wanted to use part of the money to buy a good sewing machine. I’ve never regretted that decision, and I think of Dad every time I use it.

I also owned a trunk of assorted fabrics, old clothes, and crafting materials. When I found a pattern for a little fabric doll house and its three family members—which you could make either as bunnies or mice, I decided to make our three-year-old daughter a mouse house.

This, of course, required working only while the children slept.

The first step was cutting out ALL. THE. PIECES. The walls and roof were reinforced with plastic, then padded with batting before adding fabric on both sides That’s a lot of pieces. The roof and carrying handle were made from leftover fabric I’d used to make my husband a shirt, the walls from a discarded dress. Half the roof lifted up while the front wall could be raised or lowered using zippers along each corner. Each wall included at least one window, complete with shutters and flowery window boxes on the outside, curtains on the inside. The little red door opened and closed with a snap. I even found an old pair of child’s pajamas printed with cute little mice to cut out “family portraits” to hang on the inside of the walls.

Furnishings included a little bed with a quilt and pillow. I made the sofa and matching armchair from a dress I’d worn in Grade Seven.

The three mice were made from fuzzy blue fabric with pink lining for their ears and tails of braided blue yarn. Mama Mouse wore her own little bib apron, while Papa and Baby sported only red ribbons around their necks.

As Christmas grew closer and my belly grew bigger (our third arrived January 7), I feared I’d never finish the mouse house on time. Then hubby had to attend a conference that involved staying in a downtown Winnipeg hotel. Did I want to go along? Boy, did I!

We farmed out the kids. I packed my sewing machine and all the cut-out parts, then set up shop in our hotel room. Two uninterrupted days to work on this project felt like the biggest treat. There I sat, larger than a house myself, working away at a sewing machine. Thread, stuffing, and Velcro bits lay scattered about. I can only imagine the “guess what I saw today” story the housekeeper told after leaving our room.

Our girl spent many happy hours playing with her mouse house. Last Christmas, she discovered it in our storage room and decided to take it home. I said, “At least let me fix it for you.” The roof was falling off, the furniture coming apart, the mice looking extremely ratty.

She didn’t argue. I put the house in my office so I wouldn’t forget about it.

Finally, realizing I would see Mindy again at the end of September, I got to work. This time I used a glue gun for several of the repairs, saving myself a ton of stitching. The mouse family received new whiskers. I reinforced their tails. Mama Mouse underwent eye surgery which altered her appearance, but her vision remains unchanged.

I probably spent a good six hours fixing the mouse house. Although none of those hours were interrupted by children, I do find threading a needle more time-consuming than I did 36 years ago. Go figure.

Jesus of Nazareth, the most talented carpenter who ever lived, is preparing a place with “many houses” for his beloved children. I like to think he’s putting all the care and love into mine that I put into Mindy’s mouse house—but with a lot more skill, and no need for repairs in 36 or 360 or 36,000 years.

I can’t wait to open the door to mine! 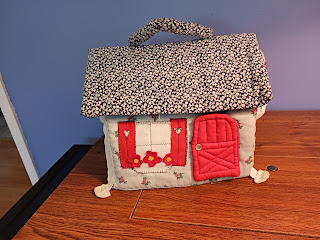