You might hate me once you’ve read this story. But it’s time I came clean about my murderous tendencies, this being Thanksgiving and all.

It was back in the days when we still fed our children. We lived in the country and had raised chickens for several years. One year, we suffered a grasshopper plague of Old Testament proportions. We’d been told you can turn grasshoppers into turkey meat by letting the birds free-range on the property. So we bought a dozen turkey chicks, and as soon as they grew big enough, we allowed them to roam the grounds by day, eating all the grasshoppers they wanted, and then herded them inside with the chickens at night.

Our Redbone Coon Hound, Radar, seemed to think the turkeys should be his own personal roaming buffet. The Alpha male, also known as my husband, trained Radar to rethink that notion. Eventually the birds grew big enough to intimidate the dog and he left them alone. Except for one slightly crippled turkey who had a challenge keeping up with the flock. One day when Alpha Male was away, the temptation proved too much for Radar. My elder son saw him harassing the poor bird from the kitchen window, but by the time we ran out there, the damage was done. We tied the dog and inspected the destruction. The poor turkey was wounded beyond repair and I knew he needed to be put out of my misery.

I had performed every aspect of chicken production except the actual part where their lives end. Time to pull up my big-girl socks and rescue this wretched critter from his pain.

But far be it from me to let perfectly good turkey meat go to waste. 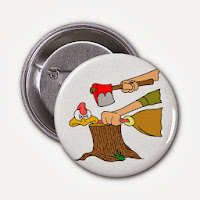 I filled the biggest pot I could find and placed it on the stove to boil. It was easy to catch the wounded turkey and find the axe. Laying him on the chopping block and avoiding eye contact? Not so easy. I reminded myself he was suffering. With one mighty yell and two mighty blows (sorry, bird), I separated his head from the rest of him and dipped him in the scalding water. Once plucked, it became obvious I shouldn’t have bothered. Crippled birds don’t put on nearly as much meat as the healthy ones. But I’d come this far. Maybe we could get a nice sandwich or two out of him.

I eviscerated and triple-washed him, then threw the skinny thing into the oven, making sure Radar wasn’t rewarded with so much as a feather. By this time, I felt so frazzled from the stress of it all, I decided to go for a calming walk. When I returned, the aroma of roasting turkey filled the house. I should have checked on it then. I’d wrongly estimated how quickly a scrawny young turkey will cook. Next time I looked, he was a slightly burnt scrawny young turkey.

But far be it from me to let slightly burnt turkey meat go to waste. I broke the carcass apart, threw it into a soup pot and cooked us some turkey soup. It tasted slightly charred, but we ate it anyway because…. far be it from me.

From that day to this, I have personally killed nothing larger than a housefly. That I know of. Just another reason to be grateful this Thanksgiving. I hope yours is a good one!
Posted by Terrie Todd at 3:31 PM