The (not so) Great Pumpkin Heist 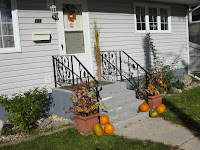 This being pumpkin season, I am on a quest to discover why six perfectly good pumpkins disappeared from our front steps just four days after I placed them there, and four days before Thanksgiving. The assumption we first made—that someone swiped them—is simply and obviously too boring for a drama queen like myself. So I’ve dreamed up a few more creative possibilities.

Probability #1. Aliens. A band of marauding scientists from the faraway planet Zidgot descended on earth, disguised themselves as humans, stole a van, parked it in front of our house, and grabbed our pumpkins to take home for research. Confused about how a pumpkin turns into a jack-o-lantern, they want to observe the metamorphosis firsthand. They are going to be sorely disappointed.

Probability #2. Our pumpkins were indeed seized by actual humans, but no ill was intended. In fact, the pumpkin bandits are at this very moment baking pumpkin pies, muffins, and tarts which they will leave on my doorstep any minute now.

Probability #3. The pumpkins crawled away of their own accord, as suggested by my friend Pat who figures they are on a spiritual journey in search of the Great Pumpkin. If Pat is correct, I hope the little pumpkins find what they’re looking for soon, before they get snatched up and turned into pies, muffins, and tarts.

Probability #4. They were purloined by none other than Robin Hood himself, who steals from the rich to give to the poor. He donated them to a homeless shelter where they were baked into pies, muffins, and tarts and enjoyed by down-and-outers on Thanksgiving Day. I can live with this possibility quite nicely, even if my front porch looks rather pathetic for the season. Robin, if you’re reading this: you should have just asked.

Probability #5. Innocent children mistook the decorative pumpkins for “Help Yourself” trick or treats, albeit a couple of weeks early. The poor little tykes toddled off with their massive treats, tried to bite into them, and broke all their baby teeth. Some local dentist is saying “cha-ching!”

Probability #6. Someone addicted to Pintrest saw the cutest craft idea EVER, and simply had to reproduce it for her Thanksgiving table. Alas, with no pumpkins from which to make it, she pilfered mine to feed her addiction. Get help, girl.

Probability #7. Peter Pumpkin Eater happened to walk by our house and couldn’t resist. He gobbled down all six, and now lives inside one of the shells with the wife he previously could not keep. (Mother Goose made a bigger impact on my life than I previously thought.)

Probability #8. Someone failed to teach their children that taking things from others’ doorsteps is stealing. Or that stealing is wrong. Or that doing wrong carries consequences. Since at least one of our thieves was old enough to drive, those untaught lessons obviously stick. So, relatively speaking, I am not the loser here.

Whichever of these theories proves true, we intend to open our door to our little neighbourhood goblins as long as the treats hold out. Hope they don’t expect pumpkin pies, muffins, or tarts.

An update to this story: my young neighbour, Malachi, showed up at my door with a gift of two lovely pumpkins, carved himself. How sweet is that? (Even if he did make a liar out of me, going on about my bleak doorstep.)
Posted by Terrie Todd at 1:59 PM