When you’ve got nineteen successful Broadway plays under your belt, you can afford to write your first farce. That’s what Neil Simon did in 1988, and people have been laughing at Rumors ever since. They’ll be chortling in Portage la Prairie, too, thanks to the Prairie Players.

Four couples are guests at the home of Charlie and Myra Brock, a well-to-do couple celebrating their tenth anniversary, but who don’t actually appear on stage. It’s left to the dinner party guests to prepare their own meal and uncover the reasons for their missing hostess, her absent help, and their host’s gunshot wound.

Like any good farce, police must make their appearance, and they do. Officers Ben Welch and Connie Pudney are portrayed by Larry Lepla and Teresa Bergen.

Rumour has it the Prairie Players are presenting Rumors for the second time. The first was in 1996, directed by Terry Tully. Did he not get it right the first time or did he love it so much he wanted to repeat the experience? Oh, the rumours I could start.

Rumour has it stage manager Rita Carignan is stage-managing for the first time ever.

Rumour has it Stephanie Kauffman, having aced the stage manager’s job, is acting with the Prairie Players for the first time. Rumour has it she would only agree to take the role if she could keep a bottle on stage with her.

Rumour has it Wayne Loeppky is deaf in real life, which makes his portrayal of a hearing person that much more remarkable.

Rumour has it Kevin Hamm can be a bit of a diva, demanding a curved pipe instead of the plainer one first provided for him.

Rumour has it Rob Smith was a child actor, since he played the role of the psychoanalyst, Dr. Cusack, when the group did this play seventeen years ago.

Rumour has it Danica Turcotte is a new-age enthusiast who can’t play a role without a crystal on her person, so they needed to work it into the script somehow.

Rumour has it Peggy Tidsbury and Chris Kitchen have a thing. I won’t attempt to define “thing.”

Rumour has it Larry Lepla and Theresa Bergen secretly wanted to join the police force in real life, but were rejected due to former involvement with the mafia. And speaking of mafia, rumour has it a gun goes off during this production.

Of course, you’ll need to attend the play in order to sort out which of these rumours are true. But if you’re looking for sentimental tears, poignant moments, deep inner healing, and personal growth, pick a different show. 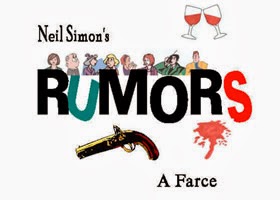 Come for the laughs, the mad-cap door slamming, and the nice little plot-kick at the end, all provided by a stellar and fun-loving bunch of people. November 13-16 at the William Glesby Centre. Call them at 204-239-4848 for play-only tickets ($13) on Wednesday and Thursday or dinner theatre tickets ($45) on Friday and Saturday.
Posted by Terrie Todd at 1:35 PM